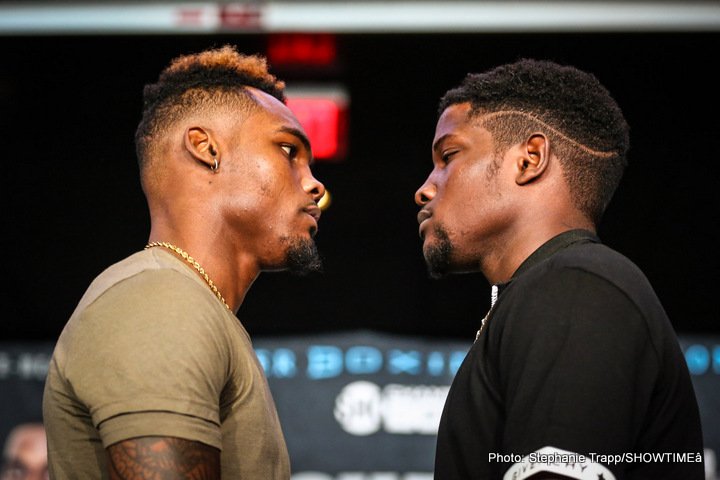 By Jim Dower: WBC World junior middleweight champion Jermell Charlo (29-0, 14 KOs) will be defending his title for the second time next month against his mandatory Erickson Lubin (18-0, 13 KOs) on October 14 at the Barclays Center in Brooklyn, New York.

Charlo, 27, took exception to Lubin criticizing his recent opposition in defeating Charles Hatley in his first defense of his title last April. Charlo says he’s never heard of the opponents that Lubin has fought before during his 4-year pro career.

Charlo has his toughest fight of his career against the unbeaten Lubin. This is going to be a real test to see if Charlo is the real deal or not. He’s looked good lately in beating Charles Hatley, John Jackson and Joachim Alcine by knockouts in his last 3 fights. Before that, however, Charlo hadn’t looked as good in beating Vanes Martirosyan, Mario Alberto Lozano, Charles Bellamy and Gabriel Rosado. Charlo’s win over Martirosyan was a controversial 10 round unanimous decision. It was very close. There probably should have been a rematch to clear up the controversy. Lubin has the punching power to give Charlo problems if he lets him hang around long enough for him to land his big power shots.

Jarrell Charlo trained recently with IBF welterweight champion Errol Spence Jr. in Dallas. Charlo got a lot out of working with Spence, who recently stopped Kell Brook last May to win the IBF 147 lb. title.

Lubin, 21, seems to be getting better with each fight. It’s scary to think of how good this guy will be by the time he reaches Charlo’s age at 27. By that time, Lubin will likely be fighting in the middleweight division. He’s not going to be able to make weight for 154 as he gets older. Charlo is catching Lubin at the right time though, as he’s not yet as good as he’s going to be in a few years from now.