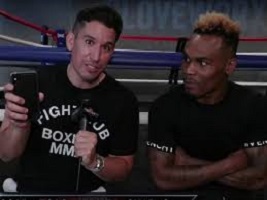 Jermell Charlo sits down with Marcos Villegas of Fight Hub TV to discuss some of his notable tweets on Twitter, discussing Erickson Lubin, Austin Trout, Jaime Munguia, and other topics. Check out what Charlo had to say…

Charlo on having a pinned tweet of his knockout of Erickson Lubin, saying “Keep Running Your Mouth”:

“‘Cause he talked so much shit. He even talked shit after the fight!…He ain’t a man! He ain’t a man. I’m off him.”

On Steve Harvey tweeting him for his community service:

“You know, we do things when they throw em at us. The Steve Harvey show was pretty awesome. You know, some kids wanted to come to the fights so we invited them to the fights. I have raised almost $20-$30K for one kid who actually beat cancer…we love entertaining the kids.”

On Showtime posting a picture of him sparring Errol Spence and what that’s like:

“It’s, oh my god, I don’t gotta spar today or tomorrow — I feel good, bro! It’s very hard. It’s intense…If my coach is standing next to you he’ll tell you right now — it’s not easy at all. It’s very difficult, it’s very hard to spar with him and you gotta be on your A-game all the way through, from the start to the finish of camp.”

On if the sparring ever gets too heated or if they have enough respect between each other to not try to hurt one another:

On him tweeting “Today I’m starting to block a lot of you pussies, even some of you boxers, ain’t nobody safe”:

“A lot of people go in there and talk that ying yang to me and I block they ass! I block a lot of people all the time! Everyday I’m blockin’ people ‘cause they scared to say that shit in my face. When I see em they don’t — ‘cause they know I’ll get on they ass like for real, for real. That’s it.”

On tweeting he’s focused on Austin Trout when a lot of people think he’ll have a dominant performance against him:

“They know I train hard so, I mean, I don’t know. I can’t predict what’s gonna happen. So all I gotta do is just get in there and fight like we never fought before…All I can expect is for Trout to come out there and do what he do and I’ma come out and do what I do, and the best man win.”

On retweeting that Sadam Ali got ‘setup’ against Jaime Munguia:

“I know for a fact that [Ali] didn’t necessarily take the chance and the time to think about that fight, he just chose it after he seen the guy drop out. He wanted to continue to fight, everybody wanna be in the ring so I believe Ali, he’ll bounce back, but that guy was just way too big, way too fast for him…

“Ali really a 147 pounder, he’s not a 154 pounder. He won a title off Cotto old ass and Cotto been gone! And if I coulda fought Cotto, I woulda had the title and they woulda been over there trying to fight me. But unfortunately I didn’t get the Cotto fight because that ain’t my promoter and that wasn’t my objective — I had Lubin to worry about.

“They got the titles now, I want them, and I’ma continue to try and get them, okay? Simple as that.”

On if he’s thinking about a fight with Munguia:

“He’s definitely gonna have to try and fight somebody else. He ain’t gonna fight me yet, you know. He got a lot of stuff that he gotta go through to get to that WBC. I know that’s the title he want ‘cause he a Mexican, and WBC titles is something they grew up on. But right now I got Trout, I got a bunch of other fighters that I would consider to fight before I take on a fight with this guy.

“Not like I’m running from him or some shit, he can’t beat me! Nobody in the weight can beat me! But I’m just sayin’…”