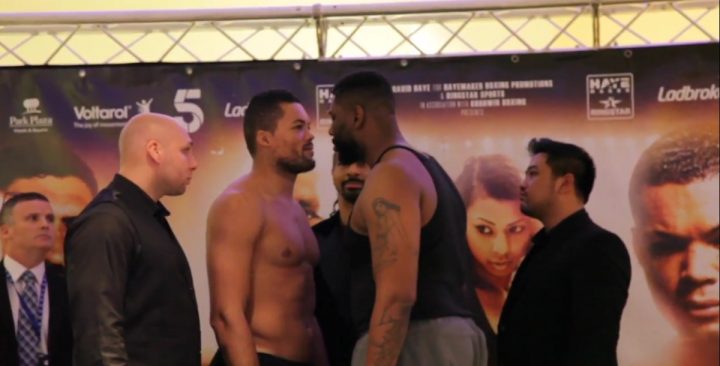 Heavyweights Joe Joyce (2-0, 2 KOs) and American Donnie Parker (9-1-1, 8 KOs) had words during Friday’s weigh-in for their scheduled 10 round fight this Saturday night on March 17th at York Hall in Bethnal Green, London, England.

The 6’10” Parker weighed in at 301 pounds. That’s 25 lbs. more than the 34-year-old Parker weighed for his last fight against Bobby Favors last year in April. Parker stopped Favors in the 1st round. Parker does not look like he’s in good shape. He kept a shirt on during the weigh-in, which isn’t surprising.

Joyce weighed in at 250 lbs. His weight is four lbs. lighter than the 254 lbs. that he came in for his previous fight against Rudolf Jozic on February 16th of last month. Joyce looks in good shape. Just based on the difference in physical condition of the two fighters, this fight could end early with Joyce knocking out Parker within 2 rounds.

“I’ve made no secret that I am happy to face the most avoided names in the sport, Chisora was offered good money to fight me, life changing money but he was not a man of his word,” Joyce said. “I’m ready to go to work and look forward to dispatching ‘Big Nasty’.”

I wouldn’t say that Chisora was offered life changing money for the Joyce fight. That depends on what Joyce considers “life changing” money. Life-changing money is the type of money that Carlos Takam made for his recent fight with Anthony Joshua last October, and the kind of money WBO heavyweight champion Joseph Parker will be getting against AJ on March 31.

Joyce stopped the over-matched Jozic in the 1st round. 2016 Olympic super heavyweight silver medalist Joyce will be fighting next against an opponent still to be determined on May 5th on the undercard of Tony Bellew vs. David Haye at the O2 Arena in London, England. Haye was hoping to get former heavyweight title challenger Dereck Chisora to agree to fight Joyce, but that fight doesn’t look like a possibility. It’s going to have to be someone else.

Parker is a native of Massachusetts in the U.S. He’s been a pro since 2012. His only loss on his 11-fight resume came against Daniel Pasciolla in a 6 round split decision defeat in October 2015. Parker has won his last three fights against lower level opposition. Parker has not been fighting a lot though. He fought once in 2016 and 2017. For whatever reason, Parker hasn’t been fighting often in the last two years, and he didn’t look like he was in great shape at the weigh-in today.

The 6’6” Joyce, 32, is being pushed quickly by his management to try and get him into position for a title shot before he gets too old to take advantage of his size and boxing skills. It’s proving not to be so easy though. Joyce doesn’t have many takers with the promoters for different top contenders not being interested in putting together fights with him. Without Joyce being able to get fights against top contenders, it might take him a considerable amount of time before he gets ranked high enough for a title shot against one of the heavyweight champions. Hopefully Joyce doesn’t have to wait 4 to 6 years before he’s ranked high enough to get a crack at a title, but you never know. Facing weak opposition like Donnie Parker, Ian Lewison and Jozic isn’t going to get him ranked fast.

“Let’s see what ‘The Juggernaut’ really has, I have watched him on tape, he is slow and one dimensional, I won’t be losing any sleep,” Parker said. “He has bitten off more than he can chew accepting a fight with the ‘Big Nasty’. He is used to being the big man in the ring. It’s the only card he has to play. Let’s see how he copes being looked down on, the small guy in the battle. March 17th not going to be pretty, Joyce is going to lose in such a way I will put an end to his pampered career,” Parker said.