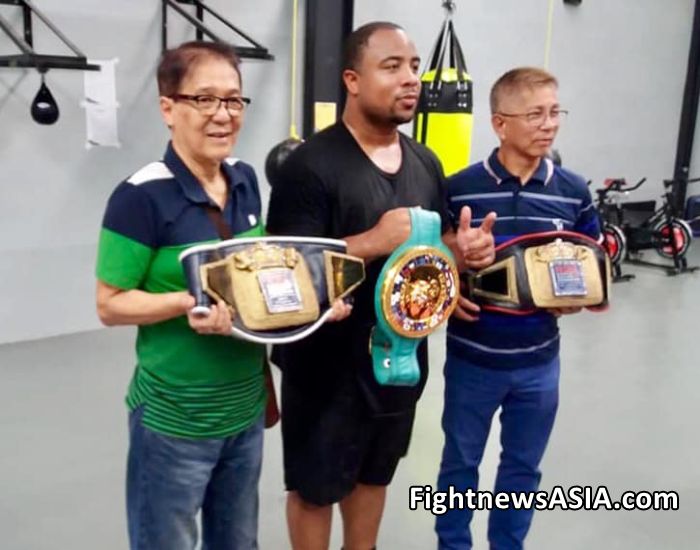 Aka “The American Dream,” Johnson daily communicates with his wife and family in Las Vegas as a way to relax his tired body.

“Hey, my daughter McKenna just finished her dance recital last week and I’m proud of her,” blared Johnson like the proud father of four that he is.

Farah is likewise glued to his cellphone talking long distance to his girlfriend with whom he has 3 kids – 2 girls and a boy.

He doesn’t speak English but his quiet demeanor exudes the modesty and simplicity Bolivians are quite known for.

Johnson played high school football and basketball before being attracted to boxing.

“Laila Ali (Muhamad Ali’s daughter) took me in her wings and brought Las Vegas where have resided for the last 18 years,” , thanking her for tutoring him.

He has put up a company, The American Dream inc., that deals in government contracting.

The Cleveland-born, Ohio native is also into the music recording business in partnership with rapper Ray j.

RED Boxing chair Reynaldo Rodis, promoter of the Thrilla in Davao, during spare hours to separately bring the two ring gladiators their time in a worthwhile way.

Farah yesterday visited the Tambayan Center for Children’s Rights, Inc., an NGO that works in tandem with  Adolescent Girls in the Street. Glorie Vi Seno is Tambayan’s leader.

Farah advised the young girls who were formerly juveniles and lives to get into sports to keep themselves busy and bad company.

“I was a poor boy myself, struggling to get my head above water,” the Bolivian heavyweight kingpin told wide-eyed girls in their teens who first time saw a hulking but gentle giant now fighting for heavyweight crown.

Previously, Johnson likewise dropped by the House of Hope, a charity-funded haven for young cancer victims and brought gifts smiles.

A motorcade tomorrow Thursday around selected Davao streets to an end the preparation of both boxers who are confident the vacant GBO heavyweight title as an additional feather cap.