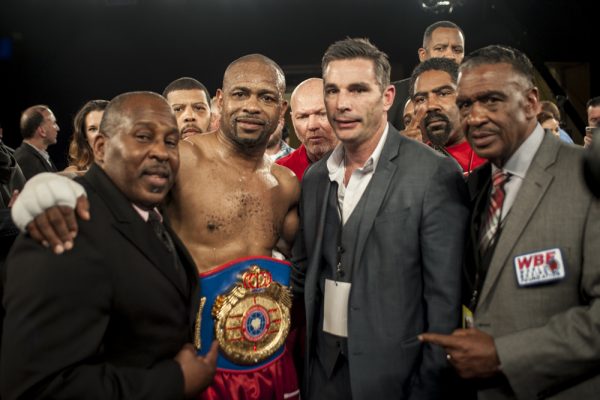 Delaware boxing fans came out in force to get a glimpse of former multi-champion Roy Jones Jr. in the twilight of his career, and the 48-year old ring legend thrilled his many supporters by coming out victorious. Jones, 65-9, 47 KOs, scored an 8th round TKO of traveling tough guy Bobby Gunn, 21-7-1, 18 KOs, at the Chase Center in Wilmington, DE.

Jones dominated the action for six rounds before nearly flooring Gunn with a left hook in round seven. Gunn buckled from the punch, and it appeared Jones could have put him down with just one more shot – even a tap. However, Jones backed off and chose not to hit Gunn again.

Roy’s show of mercy allowed Gunn to survive the round, and the incident was par for this mostly friendly fight. The evening was filled with mugging, smiles, handshakes and much respect between the fighters.

After a minute’s rest, the bell sounded for round eight and Gunn took a step toward ring center before his corner men called him back and asked referee Bill Clancy to stop the fight. The official time was 7 seconds of round eight.

After the fight, both fighters praised each other and continued their friendly banter.

“I think he took it easy on me,” Gunn said of Jones.

No doubt that was the case.