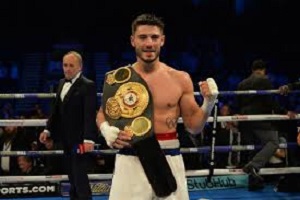 “Every fight is a make or break fight so it doesn’t matter if he had lost one or lost two. Obviously it recognises that he’s a good fighter but it doesn’t matter to me. He’s quite a strong, basic fit guy. He does some unorthodox stuff but once I get the rhythm, once I start dancing I should be alright.”

Unbeaten records are, of course, not all created equal, especially in the early stages. Kelly has already done some solid work for where he’s at in his career, and the oddsmakers have him anywhere between 45-to-1 and 100-to-1 to win for a reason. He’s the more celebrated young fighter by quite a bit.

But Runowski, 24, could surprise. You never know until you know, and he is 17-0. He’s been able to do the job thus far. It would obviously be a huge upset, though, and if Matchroom felt this was truly dangerous, Runowski probably wouldn’t be here.