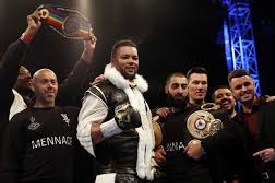 Joe Joyce stayed unbeaten today in Stevenage, England, stopping 42-year-old Russian Alexander Ustinov in the third round, setting up a July 13 return in London on the Dubois-Gorman undercard.

Joyce (9-0, 9 KO) still looks a little slow, but the hands are heavy and that was too much for the faded Ustinov (34-3, 25 KO), who has now lost three straight, and two in a row by stoppage. Ustinov is at a point where it’s clearly time to hang up the gloves, but we’ll see.

Joyce, 33, had an extremely slow and creaky target in front of him today, as Ustinov moves like Frankenstein’s monster at this point in his career. But that was the job in front of him, and he did it, dropping and stopping Ustinov at 1:55 of the third round.

With the win, Foster (11-0-1, 4 KO) unifies the British and Commonwealth super bantamweight titles, not a bad achievement for a 21-year-old. Lane (13-9-2, 1 KO) made a fight of this as best he could, but he was dropped in the opening round and Foster dominated early on. Lane, 28, hung around, and tagged Foster here and there.

But Foster drilled him and dropped him again with a big right hand in the 12th round, then finished the fight with just two seconds remaining, as the referee jumped in to stop things with Lane under assault once more. He probably deserved to see the final bell but ultimately Foster was well ahead on the cards (commentary said he was five points up on the judges’ cards) and it doesn’t much matter, it’s just about “didn’t get stopped.”

The 18-year-old McCann, a southpaw bantamweight, ran through Jaworek (5-13, 3 KO) quickly, attacking aggressively. He dropped the 27-year-old Polish opponent with a body shot, but Jaworek got up, though obviously still in great pain. McCann dropped him again shortly after, and the referee called it off there. Good pro debut for the #teen, who had a good amateur run for as long as he stayed in the amateurs. And yes, his nickname is Dennis “The Menace” McCann, so he has that going for him.