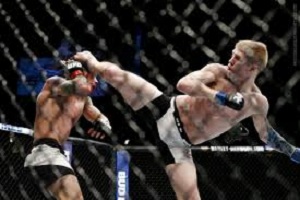 It used to be that when a fighter left the UFC, that competitor was instantly branded a failure by much of the mixed martial arts fan base.

But that’s not so much the case anymore as we head into 2019.

No one disputes that the UFC is still the biggest dog in the hunt, but the steady trickle of world-class talent away from the company during the WME/Endeavor era has opened up the sport across several promotions in a way that hasn’t been seen in years. Bellator has everyone from Gegard Mousasi to Lyoto Machida to Phil Davis; ONE Championship has snapped up talents like Eddie Alvarez and Demetrious Johnson; PFL has an interesting mix of young up-and-comers and veterans with something left to give.

There’s major league talent scattered all over the world, and Justin Scoggins is ready to be a part of it. The American Top Team competitor by way of South Carolina, who recently ended a UFC stint which dated back to 2013, starts the next chapter of his career when he makes his Rizin debut on New Year’s Eve in Saitama, Japan, against Yuki Motoya in a 132-pound bout at Rizin 14.

“I think the people understand now, the UFC sells superstars,” Scoggins said. “That’s not to say there aren’t a lot of great fighters in the UFC, but they’re a business and they’re looking to make money. Around the rest of the sport, that’s where you see the true martial arts spirit taking hold, where it’s all about the competition, and I think people know that now. Before they might have said, ‘You’re not in the UFC anymore, you suck.’ Now, more and more, they understand that there’s so much more out there in MMA if you’re a true fan.”

Scoggins’ circumstances leaving the UFC a few months back were a bit on the odd side. As rumors swirled about the impending demise of the UFC’s flyweight division, Scoggins, who lost a questionable split decision to Said Nurmagomedov in his last fight at UFC Boise on July 14, was briefly offered a short-notice replacement fight against Mark de la Rosa at bantamweight, only to not just have the bout pulled, but to be informed soon thereafter that he was being cut.

If you’re expecting Scoggins to show bitterness about his circumstances, guess again. Scoggins knows he didn’t quite get the best of his UFC tenure, with a couple questionable decisions and a couple mistakes in winnable fights causing him to end at 4-5 in the UFC.

But he’s only using this as motivation to move forward, not look back, especially considering new promotional suitors showed up right away.

“God has a plan for everyone,” Scoggins said. “Life’s too short to be bitter. I had a good run there, but this is obviously what’s meant to be, and I’m super motivated to getting in there and scrapping and putting on an exciting show and get on with the next chapter of my career and my life.”

That Scoggins will kick off the next phase of his career on one of the sport’s grandest stages certainly adds fuel to the fire. It’s not just hardcore fans who get excited about being a part of New Year’s Eve in Japan, which is as deeply embedded a tradition as this sport has. Scoggins can confirm that fighters get excited about it, too.

“Are you kidding me? It’s such a huge motivator to be a part of this show,” Scoggins said. “Everyone watched the PRIDE shows growing up. I’m going to be on this card that features all sorts of fighting. Floyd Mayweather is going to be there! And you’ve got the Bellator vs. Rizin champion fight (Darrion Caldwell vs. Kyoji Horiguchi). I can’t think of a better stage on which to show the world what I can do.”