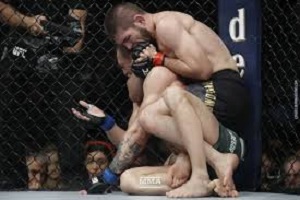 If a rematch between Khabib Nurmagomedov and Conor McGregor never happens, that would be just fine for “The Eagle” given how their first meeting shook out.

In one of the biggest grudge matches in UFC history, Nurmagomedov defeated McGregor at UFC 229 last October by fourth-round submission after using his wrestling to control the former two-division champion for the majority of their bout. He also staggered McGregor with a right hand at one point and for a moment it looked as if Nurmagomedov would finish the fight much sooner.

Nurmagomedov recently spoke about whether he was satisfied with the McGregor fight in a clip provided by Submission Radio:

“I’m looking for punishment, first of all,” Nurmagomedov said. “I wanted to make him tired. It’s very good when he tapped. It meant a lot for me (when he) tapped.

“‘Please,’ he asked me, ‘Finish.’ This is much better than knock out. If you knock him out, like, if I knocked him out in the second round, you go down, but people gonna talk about, ‘Oh, it’s luck,’ you know. But what about if you smash him all four rounds and he taps? It’s finished there. No more. I don’t think he ever wants to compete with me. Because he felt everything. He feel my mental, he felt my control, my striking and all that, and he tapped too.”

On his rise to UFC stardom, McGregor developed a reputation as a powerful puncher with unorthodox timing and footwork; however, none of McGregor’s tactics appeared to faze Nurmagomedov and the Russian believes that’s why he attempted to throw Nurmagomedov off by having a conversation in the middle of their fight.

“He was like, in the first round for a couple of minutes, he’s not bad,” Nurmagomedov said of McGregor’s timing. “But after that he’s slow and weak. He tried to talk with me about, ‘Oh, this is only business’. You know, this meant for me, ‘Please, calm down, don’t smash me.’

“It’s only business. You know, he tried to make me relax. We already finished a three-round fight and then he beginning, tried to talk about this only business. It just showed his weakness.”

Nurmagomedov, the reigning UFC lightweight champion, is currently preparing for a Jan. 29 meeting with the Nevada Athletic Commission to determine whether he will be sanctioned for the post-fight melee that was kicked off by him leaving the cage and leaping at McGregor’s friend and cornerman Dillon Danis.

Asked what it was that Danis may have said during the fight that set Nurmagomedov off, he seemed to suggest that it was his existing feud with McGregor’s camp that precipitated his actions and that Danis was the only age-appropriate target.

“But I don’t like his whole team. I have choice what I’m gonna do, but all other old coaches were too old for me. They cannot fight with me. They’re almost like my father’s age. That’s why I jump on him.”