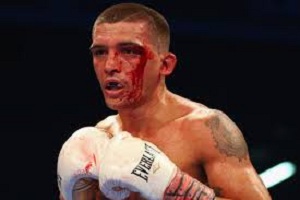 Former featherweight champion Lee Selby will make his first appearance since losing his title to Josh Warrington next month in Greenwich.

The mission to become a two weight World Champion begins on Feb 23rd at @TheO2 as I return at Lightweight against American Omar Douglas live on @ITVBoxing #TeamSelby 5935:18 PM – Jan 14, 2019 · Bristol, England151 people are talking about thisTwitter Ads info and privacy

Selby (26-2, 9 KO) spent his first couple of pro fights at or around 135 pounds, but has competed exclusively at 126 since 2011. Though he hasn’t missed weight, he has had some difficult cuts in the past, most notably in his narrow May loss to Josh Warrington that snapped a 22-fight winning streak. Moving up seems to be the correct choice, and at 5’8.5”, he shouldn’t be terribly outsized even with a two-class jump.

Douglas (19-2, 13 KO) was a prospect-ish before consecutive losses to Javier Fortuna and Edner Cherry, who are admittedly solid super featherweights. He generally competes at 130 pounds and is a fairly straightforward slugger, so he shouldn’t be too troubling an introduction into the lightweight ranks for Selby. Douglas will have a three-inch reach advantage, but a 1.5” height disadvantage.