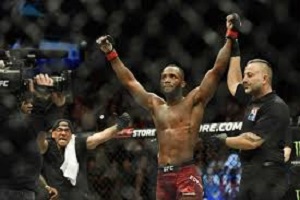 Despite his seven-fight win streak and his growing stock among the U.K. fan base, Leon Edwards is still looking to book a date on the back of his Gunnar Nelson victory at UFC London in March.

“Rocky” has recently thrown his name in the hat to step in on short notice to replace Tyron Woodley for his UFC Minneapolis clash with Robbie Lawler. He also declared interest in facing off with Rafael dos Anjos following his win over Kevin Lee at last weekend’s UFC Rochester event.

“There’s no news at the moment, I’m still pushing for a big fight,” Edwards told MMA Fighting’s Eurobash podcast. “I’m trying to get that Robbie Lawler fight, but I haven’t heard anything yet.”

“Robbie is a former champion, he’s a big name in the sport. I think I could go in there and dismantle Robbie and I should have a title shot after that. Since the weekend, RDA has gone and got a good win under his belt. That would be a good fight as well.”

The Birmingham native praised the Brazilian’s performance in his win over Kevin Lee.

“It was a solid performance, he done really well. He was on a two-fight skid before that and to come back and beat somebody like Lee, it proves a point. He’s a former world champion as well, so I think that’s another good fight for me.”

As far as Edwards is concerned, he now needs to get closer to the title by fighting a top tier welterweight.

“I’m on a seven-fight win streak now, one more fight puts me on an eight-fight streak and I would accept nothing else but a title shot when that happens. It’s just a matter of waiting now, but I really feel like after one more I’m going to be ready. I just need a high ranked opponent to prove that I deserve that title shot.”

“I’m trying to bridge the gap to the title,” he added. “For me to take on some random opponent, that does nothing for me. I feel like it’s got to be a top-five opponent next and then a title shot. Realistically, I should already be in title contention. My win streak is the second longest in the division next to the champion.”

After his success on the ground against jiu-jitsu ace Gunnar Nelson and coming off best from a five-round striking match with Donald Cerrone, Edwards thinks the higher ranked opponents in the division do not want to risk losing their ranking spots by facing him.

“I think that’s the problem; none of these guys want to lose,” said Edwards. “Robbie Lawler probably only has two fights left in him, I think he’s probably picking his fights very carefully. I’m dangerous to all of these guys. I’m well rounded; I’m one of the best strikers and one of the best grapplers. I’m out-grappling Gunnar Nelson, I’m out striking “Cowboy” Cerrone. I want some respect on my name. I know I’ll be a world champion.”

Edwards laughed off his countryman Darren Till’s attempt to get the Lawler fight.

“He needs to go and try to get his chin back,” he said. “I don’t understand where he’s coming from. He’s on a two-fight skid and he got stopped both times. I don’t think he has a say in when or where he fights.”

The current welterweight champion, Kamaru Usman, handed Edwards his last defeat in December 2015. The Team Renegade fighter is confident that it would be a completely different contest if they locked horns again.

“I’ve watched that fight many times and I’ve played through it in my head many times,” he explained. “I was a very young man back then, when me and him first fought. Now, I know that I could go out there and beat him. I’ve improved leaps and bounds since the first time I competed against him. I know I’ll be the champion if I get that rematch.”