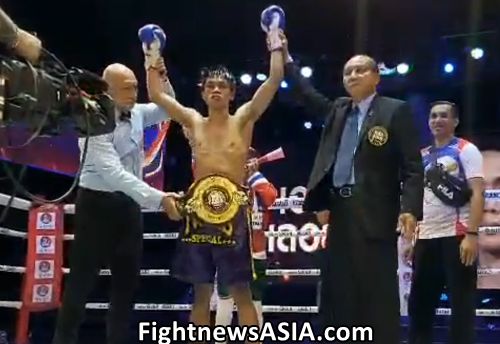 BANGKOK, Thailand   —   It was not easy at all.   But the Two Filipino Warriors Did it.   Against all odds, Adrian and Boca overpowered their fearsome Thai opponents in their own backyard to claim prestigious WBA Asian Titles, as well as berths in the WBA World Rankings.    It all transpired Sunday, March 1, here in Thailand’s amazing Capital, Bangkok.

The victory was indeed thrilling and riveting for the Filipino who earlier during the hot battle was two times on the brink of losing by knockout.  But thanks to Adrian’s big heart and determination, he managed to evade demise.

The first five frames of the war were clearly won by the Thai Tanes Ongjunta with a consistent display of power poured over the 21-year-old Filipino southpaw.

But In the sixth frame, winds began to change in favor of the boy from Pinoyland, as Adrian was able to land artillery of his own on the relentless and strong Thailander, a former Muay Thai combatant.

Seconds later during a furious close-quarters exchange in the middle of the ring, Adrian Lerasan unleashed the effective and powerful-enough combination that dropped his attacker down to the canvas.

The brave Thai got on his feet, though the tide has changed.   Refreshing new winds of hope now breezing through the hearts of the few Filipinos in attendance in the indoor air conditioned venue in the middle of this legendary City of Angels.

The seventh round arrived.    It might have been destiny or fate, but after some brave attacks from the tough Thai, it was the determined Adrian Lerasan the one who command the actions, dropping Ongjunta for a second time in the duel.

Once again, the Thai went back on his feet after the mandatory count of veteran Thai third Man Pinit Prayadsab; and one more time Adrian rocked Ongjunta down to the floor for third and final time.

It was a well-deserved thrilling win for the Filipino who enters in resounding fashion into the realm of world-ranked super flyweights.

In the co-feature, Camiguin fighter Jeny Boy Boca (14-6, 12 KO’s) did the unthinkable by stopping in just four stanzas the more-experienced, taller, former world-title challenger Sarawut Thawornkham (21-3, 16 KO’s) to claim the WBA Asia Flyweight title, a battle televised live Sunday afternoon around 4 pm on open TV throughout the Kingdom of Thailand.

From the getgo, the tattooed and friendly 25-year-old Jeny Boy Boca was the faster more skilled, more active, more effective, more enthusiastic warrior, confusing Sarawut from the beginning of hostilities, and situation just got worst for the Thai boxer as the war progresses till the inevitable outcome unfolded: a sizzling round 4 TKO win in favor of the Filipino.

The entertaining televised double-header card Sunday afternoon in Bangkok was a production of Thailand’s TL Promotions with the matchmaking effort of Supanat Chanram.

The author Carlos Costa of Panama is a veteran boxing reporter living in Asia.   Carlos can be reached at carlos512@hotmail.com and whatsapp +639184538152.