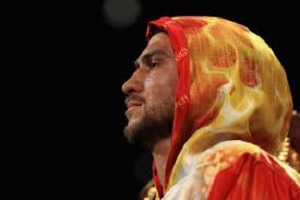 Vasyl Lomachenko doesn’t think he’ll have any siginficant size advantage over Guillermo Rigondeaux in their showdown.

We’re just about a week-and-a-half away from what should be one of best boxing chess matches in recent years when Vasyl Lomachenko takes on Guillermo Rigondeaux on December 9th on ESPN.

And while Lomachenko will be putting his WBO 130lb world title on the line in this fight, Rigondeaux — who holds the WBA’s 122lb title — also has some hardware to lose in this bout. The WBA has stated that Rigondeaux will be stripped of his world title should he lose this fight, making the incentives for both fighters clear.

Looking at the match-up itself, no fan really disputes the credentials and skill level of either boxer, so most of the talk leading up to this fight has been about how Rigondeaux, who is jumping two weight classes for this fight, will be able to cope with a fighter thought to be just as skilled as him, only bigger.

Yet Vasyl Lomachenko isn’t putting much stock into any real or perceived size advantage he will have on fight night, telling RingTV that he believes he and Rigondeaux are basically the same size.

While on paper Lomachenko sports a 2 inch height advantage over Rigondeaux, Rigondeaux actually holds a 2 1⁄2 inch reach advantage over Lomachenko. And you can bet the skilled technician will be attempting to make every use of those longer arms to stave off Lomachenko’s attack while (hopefully) mounting his own.

Can Rigondeaux do so to great effect? Well, that’s what we’ll all be tuning in to find out…