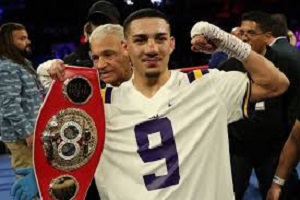 Young gun Teofimo Lopez is in a New York state of mind, being that it really seems like his hugely anticipated bout with Vasiliy Lomachenko will land May 30 at Madison Square Garden, the iconic Manhattan venue.

That’s the date penciled-in date, when we’ll see if the impressive volume of talk from young Lopez (15-0, 12 KO) can be matched with his walk.

OK, walk isn’t the right word; this test will be a full step up from Richard Commey on paper, because Lomachenko (14-1, 10 KO) moves his feet and fists unlike anyone else in the game. In other words, you aren’t going to find a sparring partner to approximate the 32-year-old from Ukraine.

Doesn’t seem like that is bothersome to Lopez, last seen doing a destruction job on Commey, and wresting the IBF 135-pound crown from the Ghanaian.

On the Everlast “Talkbox” podcast, (18:12 mark), Lopez didn’t stutter one stitch when I asked him what would happen on May 30, when he butts heads with the WBO/WBA lightweight belt holder.

“I’m gonna knock the son of a bitch out,” Teofimo said. “I don’t like him. I had feelings for Richard Commey even before the fight. We both were fighting for the same dream, the same passion, he was doing it for his people, and I was doing it for mine. And the best man won that night. With Lomachenko, I don’t like the guy, so it’s just gonna make it a little bit better. There’s no feelings there, there’s no respect there.”

His mission? “Turn the doubters into believers, and have them all support us and follow us after this fight. It’s gonna be big!”

It’s a trip to sit back and ponder, a bit over one year ago, Teofimo got a taste of the harsher side of a culture that both worships and detests celebrities. He heard from nattering nabobs after he celebrated heartily after taking out Diego Magdaleno in Texas. Yes, you can be flashy and exuberant, but appropriately so.

And dissectors sniped after he took out Edis Tatli in round five two months later, why didn’t he do it quicker? Yes, they will help build you up, but watch how fast the builders swing the vitriolic sledge-hammer during the tear-down process. In July of 2019, he — gasp! — went the distance against Masayoshi Nakatani in Maryland, and the impatient sorts yelled, “Exposed!”

What actually was exposed were some growing pains, which, if I had to guess, made the kid stronger. Family business was made public, as inquiring minds dug in and asked about the relationship between his new galpal, now Mrs. Lopez, and his parents The marriage seemed to be made in heaven, judging by the Insta pics — and in person, they do seem to match the energy and vibe you see on social — but his cement-bond with the lady put others used to being in the inner-most circle on uncertain ground.

For a spell, the drama sapped the fighter’s energy, some of his love for the game. There were discussions, some at a reasonable volume, some with a higher decibel level, and over spilling passion. Teofimo’s dad is a high energy sort and doesn’t pull punches verbally. But guess what? It got sorted. Boundaries were set anew, and the return to a solid level of Lopez-style serenity was bad news for Richard Commey. The summer got sweaty with that familial upheaval, but by wintertime, the chilled out inter-relating, and the addition of mellow Mainer Joey Gamache to complement Teofimo the elder in training, had Lopez back in a mode that made you think about how widespread his popularity could get to if he kept progressing.

The power, the sass, the backflips, the ability to trash talk, but also show a softer side; yeah, Top Rank could have a long-term building block in the fold for a stellar run.

Commey felt the power, he basically got steam-rolled. And the chatter that intrigued me when he came on Talkbox in late January 2018 rose got louder. In my head, anyway. Maybe prematurely, I pestered Bob Arum.

“Bob, what about this Teofimo, the kid wants to fight Loma! Why not let the young gun have a go,” I asked the legendary deal-maker, old enough to be Teofimo’s great-grandpa.

Nah, said Arum, give the kid some time, he needs to be tested. Smart, but of course; because now, after handling Commey, you’ll note that on social media, there is no shortage of fight fanatics who are picking the twenty-something to rudely and brashly interrupt the Loma win streak.

I confess, again, I might be overly upbeat, because of the skills and personality package of Lopez. But, I told the fighter, I think him and Loma sell out the big room.

“Oh yeah, that sells out the Garden,” he told me. “I have a lot of people, a lot of fans out there, every time I’ve fought at the Garden. There’s always been an exclamation point on it. You know, six times fighting at Madison Square Garden, all six by knockout, and it’s just something great. This fight needs to happen at the Garden!”

Lopez heard that Arum agreed, he thinks that Loma-Lopez will sell out the big room, as long as ticket prices are set reasonably, so non-Wall Street types can gain entry.

“That’s the way to do it, you need anyone and everyone to go out there and watch that fight,” Teofimo said. “It’s gonna be a great show, the card is gonna be great, you know you’re gonna have some of the New York natives in there already. You’re gonna have Edgar Berlanga, probably, in there. So it’s just gonna be a lot of people, a lot of people from New York, and it’s gonna be great. I just can’t wait to headline, and I won my first world title at Madison Square, and I’m looking to win all four at Madison Square Garden!”

Sometimes people ask me, hey, what is a “New York state of mind” anyway, because Billy Joel doesn’t explicitly lay it out on the track contained on his 1976 album “Turnstiles.”

I usually say confident, a bit brash, not overboard with the cocky, but with the edge that comes from sharing too little space with too many strangers. Lopez gave me some of that as the pod chat ran down. Thinking about Lopez vs Loma, May 30, at MSG, wondering who will get the nod?