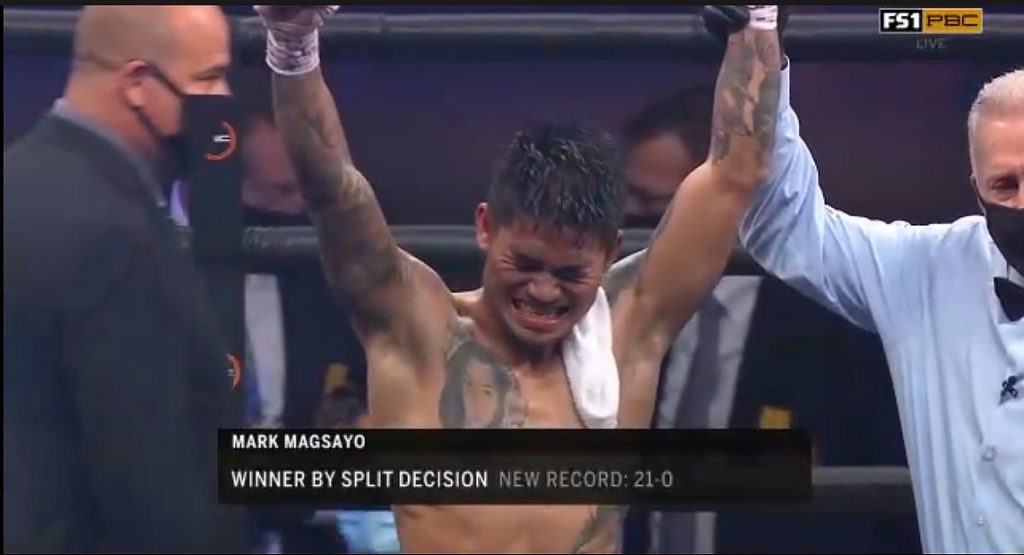 The non-title 10-rounder rumble was highly contested one for the Manny Pacquiao protege as the Mexican was fierce, game, glory-hungry and kept on trading big bombs throughout the entertaining furious clash of titans.

There were no cuts nor knockdowns, but the faster, more accurate Magsayo piled enough points to claim his first victory as a main event boxer in the U.S.

As a result, the sky is now the limit for the young Boholano who has a youngster used to work in a bakery in Tagbilaran.

Official scores from the California judges were 99-91 (twice) for Magsayo, though inexplicably one veteran judge scored for the Mexican.    The Pinoy was surely the rightful winner.

Hermosillo (11-3-1, 8 KO’s) from hot and spicy Jalisco put a good show, as all Mexican warriors do.   But clearly the best man was the faster 25-year-old Visayas native.

During the post-fight interview, Mark Magsayo thanked God and his team for his rewarding victory, admitting that his opponent was a tough nut to crack.

Meanwhile, his coach Freddy Roach, who worked with Magsayo for the first time, shared that he and Magsayo need to go back to the gym as he would love to see “El Magnifico” against WBC Featherweight World Champion Garry Russell (31-1, 18 KO’s).

Time will tell if that fight is next considering that the more matured Russell is light years better and more experienced fighter than Hermosillo.

What’s next for Magsayo is up to his handlers at MP Promotions, and one truth is certain:  Magsayo has successfully pushed forward his career, inching closer to a future world title fight.

Tonight’s fight at the Microsoft Theater was a promotion of Premier Boxing Champions live on FS1.

.The author, Boxing reporter Carlos Costa living in Cebu can be reached at carlos512@hotmail.com and whatsapp 09184538152.