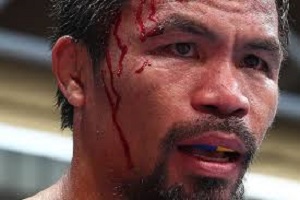 Manny Pacquiao and Lucas Matthysse have verbally committed to a July 8th fight in Kuala Lumpur, Malayasia according to a report by RingTV. And while Pacquiao’s team has recently asserted that their deal with Top Rank has expired, the promotional company is expected to be involved in the fight — just not in the lead promoter role.

Manny Pacquiao’s MP Promotions will take the lead in this fight with Top Rank expected to handle US distribution via its ESPN deal. Golden Boy, who handles Matthysse, is also going to be in the mix as well.

The fight is anticipated to take place early morning on July 8 (Malayasian time) so that it can be aired primetime in the US on Saturday night (July 7).

“[Arum] is invited and there’s no problem. I think after my fight with Matthysse, we will talk regarding the possible Pacquiao-[Vasiliy] Lomachenko fight in the future,” Pacquiao told reporters on Sunday in Manilla. “ … That is a good fight because he is a champion and I’ll be challenged to become a champion again. At the same time, I don’t want the people to say that’s just a tune-up fight.”

Pacquiao recently rejected a Top Rank offer to face Mike Alvarado on the undercard on Terence Crawford vs. Jeff Horn — with Pacquiao’s media manager calling the undercard offer insulting — yet Arum suggested that Pacquiao nixed that deal due to his legal issues with the IRS. Whether or not that’s actually the case is really here nor there, because all that matters is that joke of a fight is not happening.

So looking forward to his bout against Matthysse, Pacquiao says that he likes the style match-up with should make for an entertaining fight for the fans.

“I like [Matthysse’s] aggressive fighting style,” Pacquiao, THE RING’s No. 6 welterweight, said earlier this month. “That’s what I want, to entertain the boxing fans. Besides, Matthysse is not a dirty fighter and I highly respect him for that.”

And another interesting storyline heading into this fight is the one about Pacquiao’s lead trainer, with both Pacquiao and longtime trainer Freddie Roach playing coy about whether or not they’ll be working together for this bout. Pacquiao has been working with Roach since 2001 and rose to mainstream stardom under his tutelage. We’ll just have to see how that all plays out.