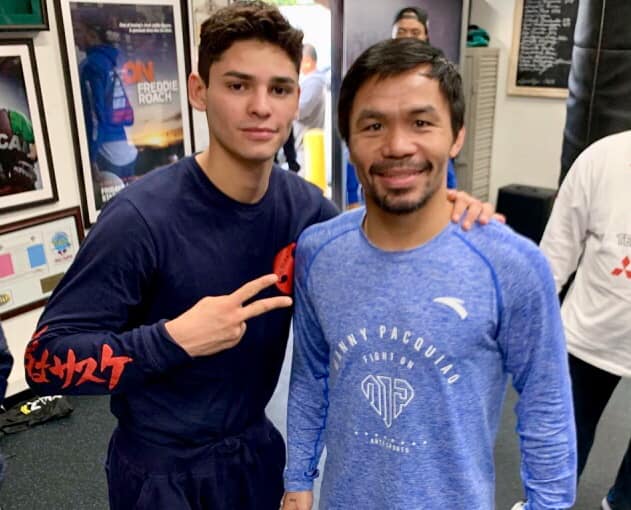 This “Dream to Reality” picture depicting Ryan Garcia in a fight poster against Manny Pacquiao is what hugely popular Mexican-American Lightweight rising star 🇲🇽🇺🇸 “King” Ryan Garcia has shared with his legions of followers in his Instagram account today, the story fast trending all over social media.

But, is it be real? Does “Kingry” really want to battle the heavier, far more experienced 🇵🇭 Pacman? Or is Ryan just expressing what would be his dream fight?

Whatever it is, in a matter of minutes Ryan’s “Dream to Reality” fight poster pic has been viewed and shared by thousands of his loyal followers in the U.S., Mexico, and around the world, quickly reaching more than a million views.

Even so, Ryan’s promoter Oscar de la Hoya, nor GBP prez Eric Gómez nor Pacquiao nor DAZN have said anything about it, not yet.

That’s why some fans think that “Kingry” might be just wishful thinking… maybe just teasing the Filipino, or maybe Ryan is for really trying to get himself into a multi-million blockbuster clash against the amazing Pacquiao, still one of the still most adored, bankable and popular boxers on Earth.

Notably, a few months ago, there were talks and reports about a possible rumble of Pacquiao against 🇮🇪 “The Notorious” Conor McGregor.

However, after Conor’s devastating knockout loss yesterday in 🇦🇪 Abu Dhabi, ravaged by the furious fists of 🇺🇸 Dustin Poirier, the prospect of “The Notorious” fighting “The Pacman” seems to have faded away.

That might be another reason why Ryan García might think that this is his chance to get in the big spotlight, confident that he has more than enough star power to step-in. Would that be?

But truly, world title fights of the magnitude of Manny Pacquiao vs Ryan Garcia normally never get announced like this, at least not traditionally.

However, in this era of social media, more and more unusual things become normal and possible.

In addition, it is worth considering that Ryan Garcia is a newly crowned interim titlist at 135-pounds, not even a regular champion in his competitive weight class where the top man is unbeaten “Takeover” Teofimo Lopez.

In contrast, the veteran Pacquiao, a superbly talented fighter, still strong, fast, and dangerous at 147. The Pacman would obliterate Ryan in no time.

That is why hardcore boxing fans it makes more sense to have Ryan Garcia, 22, battling Teófimo Lopez, Gervonta Davis, or Loma; and Pacquiao, 42, fighting Errol Spence or Terence Crawford.

Well, after sharing with you the above thoughts, my guess is that this is just Ryan’s dream fight, a result of Ryan’s admiration and respect for the Filipino boxing king, and that’s my humble opinion.