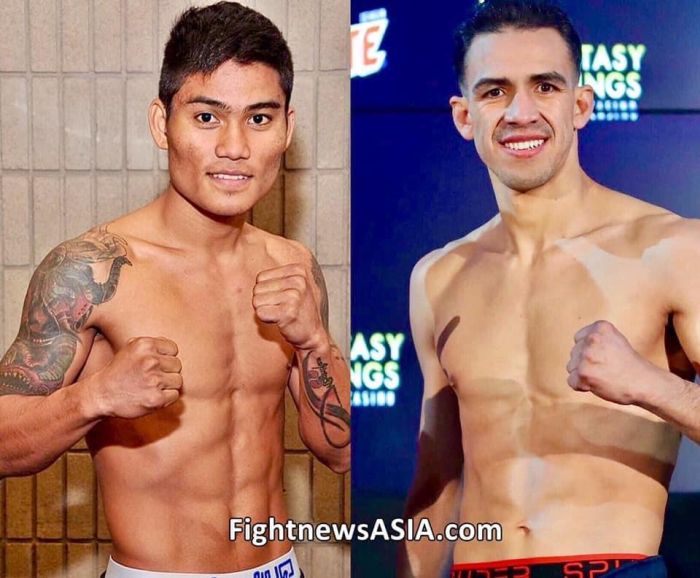 The stage could not be a better gold for the promising 🇵🇭 Magsayo (20-0, 14 KO’s), as he is set to star for the 1st time as the feature fighter in a major television network on a Saturday prime-time.

After completely missing boxing action in 2018, the world-ranked “Magnífico” returned in 2019 with a couple of wins, including a victory by points over veteran former Thai titlist 🇹🇭 Pungluang Sor Singyu.

However, to many fans Saturday’s clash could be a tough rumble for the Boholano star as the Mexican is a natural southpaw attacker who dangerously advances forward throwing explosive bombs.

That’s where Magsayo’s effective counter-punching skills should should give him the upper hand.

That we shall see.

On the blue corner will be 28-year-old Mexican 🇲🇽 Rigoberto Hermosillo (11-2-1, 8 KO’s), a native of the historic city of  🇲🇽  Guadalajara, who in fact lands into this encounter against Magsayo after suffering 2 consecutive defeats. 😬

His 1st loss was to fellow Mexican 🇲🇽🇺🇸 Manny Robles III, and the 2nd one a set back to Ukrainian 🇺🇦 Viktor Slavinskyi last November.

Would Saturday be a 3rd defeat for the Mexican?

On paper, the seemingly more skilled 🇵🇭 Mark Magsayo appears to owe more than enough boxing talent in him to deal with the less-refined Hermosillo, but in boxing there are no small enemies, anything could happen.

Should the 25-year-old 🇵🇭 Pinoy warrior emerge victorious, the chances for him to challenge for a 126-pound world-title increase exponentially.   This is  extremely important.

Absolutely.  This a superbly awesome opportunity for 🇵🇭 Magsayo to headline in the 🇺🇸United States, looking impressively good.

Will Magsayo sieze this golden opportuniy by scoring a sizzling win, similar to the one stable-mate Casimero delivered last Saturday?   His many fans say yes. 🥊

Or will the 🇲🇽 Mexican brawler spoil his evening?

That’s what we have to find out.

🇵🇭 Magsayo vs 🇲🇽 Hermosillo in Featherweight action.   May the Best Man Win!