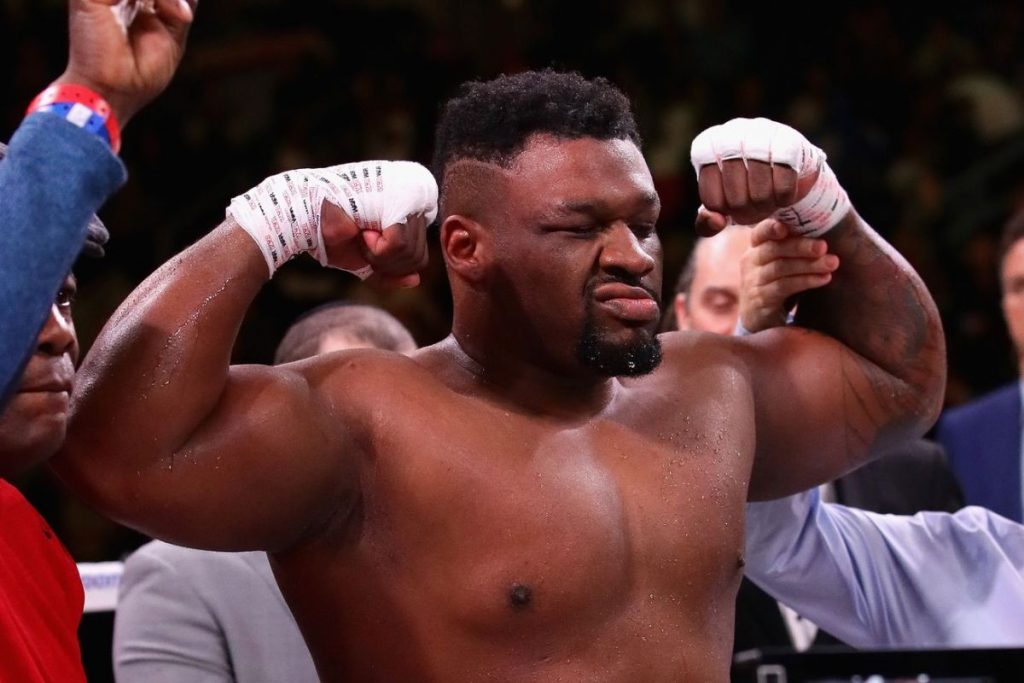 It’s been suspected of Matchroom and Eddie Hearn for some time now, however, the propaganda surrounding Jarrell “Big Baby” Miller reached new heights this past weekend, as the inevitable Anthony Joshua fight edges ever closer.

Miller – weighing in at a career-high 317-pounds – did the business against an overmatched, sorry looking Tomasz Adamek on Matchroom and DAZN’s Chicago card on Saturday night.

Crushing the lumbered 41-year-old in two rounds was expected of the heavyweight prospect, as Miller moved to 22-0-1 after adding Adamek to his recent list of victims including Gerald Washington, Mariusz Wach, and Johann Duhaupas.

Not the worst list for a guy who is vying for world honours, but a long way off the elite heavyweights that are currently controlling the division. Continuing to add to his weight fight-on-fight, Miller has drawn criticism for his size on fight nights; we haven’t yet seen him tested enough to draw a definitive conclusion on the negative impact all 317-pounds has on his chances inside the ring.

He throws enough punches inside a round, his chin has passed tests and we know he can bang; I’d be a lot more positive if these weren’t showcased against a 58-fight veteran.

Miller seems like a nice guy. He understands the business, understands the hype and understands that signing with Matchroom Boxing was the safest bet to get a slice of the heavyweight pie; the size of that slice will be discovered in the next 12 months.

Miller’s next goal is to claim the WBA (Regular) strap. Manuel Charr has recently failed a drugs test for two banned substances putting his defence against Fres Oquendo on hold; ranked number two by the WBA would allow Miller to fill the void in that fight taking on the Puerto Rican for the vacant title. Ifs buts and maybes, yes, but if Miller can secure the secondary title by early 2019, Matchroom will begin looking towards “Big Baby” as a mandatory option for AJ.

Ever since his signing, Eddie Hearn has plugged Miller’s name at the end of monologues, discussing the potential candidates for Anthony Joshua; their clash on stage at the DAZN launch was timed perfectly as a stand-out story from an otherwise tame press conference. We are forever being told that this is a “golden generation” for heavyweight boxing, but without any real strength in depth outside the top four or five, “Big Baby” has been offered a golden ticket; a queue jump; a free hit, at the face of boxing in the UK – if not worldwide.

We are all bored of the Joshua-Wilder negotiations. Who said what, who did what, who’s to blame… who cares?! It’s clear that this fight is a long way off materialising – despite the WBC’s ordering of the fight following Wilder-Fury on December 1 – with Matchroom slowly beginning to reveal their hand on their plan B and C (otherwise known as plan A all along).

Plan B is Dillian Whyte. This fight looks set to fill the April 13 slot at Wembley Stadium in a rematch of their 2015 grudge match which saw AJ tested for the first time. I have no problem in Whyte getting a world title shot; his win against Parker showed his credentials in the upper echelons of the division. Whether his shot should have come against Wilder is a different argument altogether. Whether he fights/beats Chisora/Ortiz in December to seal the slot is another unanswered question.

This is where the Miller puzzle piece fits seamlessly into the Matchroom puzzle. Continuously referencing the need for Joshua to fight stateside to further build his brand, a DAZN show with a Joshua-Miller headline – masked as a need to fulfil mandatory requirements – ticks all the boxes.

In twelve months time, we’ll still be having the same conversations. Who is the real heavyweight king? When will Joshua be tested? Who is ducking who? We are used to this by now, but it doesn’t make it any easier to swallow.