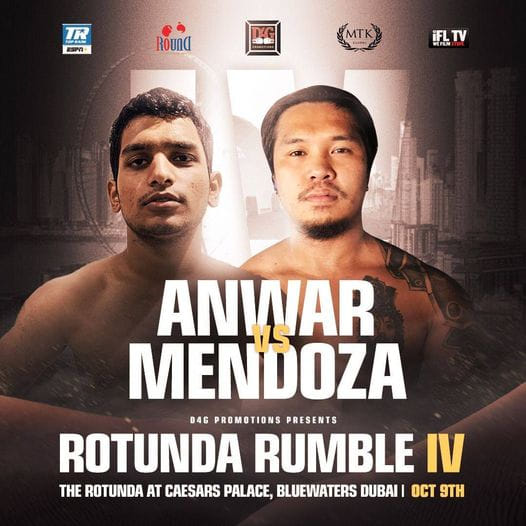 Mendoza to fight Anwar in Dubai on Oct. 9

It will be Mendoza’s comeback fight since he won his last bout against Elmer Legaria of Sarangani via a knockout in the 3rd round last Aug. 14, 2015 at SM City Annex in Davao City.
The 31-year old Mendoza has 11 wins with five knockouts against 19 loses.

Anwar, on the other hand, only has a record of three wins with three knockouts.
The 19-year old Anwar last won against Gideon Agbosu of Ghana by a technical knockout last March 6 in Dubai.

The must-see Rotunda Rumble IV event will be produced by D4G Promotions in association with Round 10 Boxing and MTK Global – and will be broadcast live in the US on ESPN+ in association with Top Rank, and worldwide on IFL TV.
It will mainly feature a superb main event between undefeated Viktor Kotochigov and Maxi Hughes for the WBC International lightweight title.
“I’m delighted to announce another huge edition of the Rotunda Rumble,” said Ahmed A. Seddiqi of D4G Promotions.