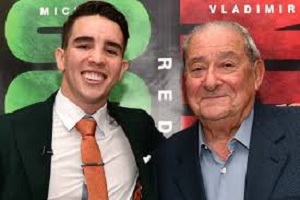 Michael Conlan’s August 3 return to Belfast to face old amateur rival Vladimir Nikitin is now 100 percent official, as the two will meet at Falls Park during Féile an Phobail, an annual festival in the city.

Conlan (11-0, 6 KO) was flat-out robbed of a win at the 2016 Olympics in Rio against Nikitin (3-0, 0 KO), famously giving the judges the finger on live TV before ranting in a post-fight interview, lobbing obscenities at will. It was a justified reaction. Generally, we’ll say something was “controversial” — a Wilder-Fury type decision, for instance — but Conlan-Nikitin in Rio was pure robbery.

Conlan, 27, tells iFL that the fight was easy to make, and that it’s been a goal of his since Nikitin turned pro last year.

“I wasn’t sure when it would ever come, but once Top Rank signed Vladimir and Bob put it out there that he wanted to make it happen, I knew it would happen whenever we really wanted it to happen,” the featherweight prospect said. “I told the team we wanted him, we spoke about it, they got into contact with Top Rank and Bob and they said let’s do it. It was very, very easy to get done, and I’m very, very happy.”

Asked if a win over Nikitin would erase the memory, Conlan admitted that it will always be there, but that this is a fight he needs for himself.

“I think it will always be there. It won’t linger, but I think it will be there, it’s always gonna be there. It’s in the history books, what happened happened,” he said. “I think when I fight Vladimir and I do beat him — I do believe I’ll take him out — it kind of sets up where I want to go as a professional, lets me look ahead instead of having some kind of barrier in front of me.

“This is like a barrier from where I want to go, this is the first thing I need to knock down. That’s been my goal since turning professional, to get it out of the way, and then I can look forward to winning world titles. That’s all I can really say. I just want to get it out of the way. I’m looking forward to it, I know Vladimir’s full of confidence, he obviously feels he’s been wronged. His career’s been remembered for a controversial decision over me, and he’s coming in to prove a point. He’s coming into my hometown, it shows you how confident he is. I’m looking forward to it. I need this fight.”

Nikitin, 29, simply isn’t the level of prospect that Conlan is, which is not a surprise since he’s never been as good as Conlan. When you consider that just to get to Conlan, Nikitin also had to get a really questionable decision over Thailand’s Chatchai Butdee in Rio, and the fact that in Nikitin’s last pro fight in March, he was nearly beaten by club fighter Juan Tapia, the fight frankly starts to look like a likely mismatch.

But promoter Bob Arum, of course, doesn’t want anyone to think too hard about that, saying that the Russian will be coming to win.

“Don’t think for a minute that this guy Nikitin is coming in for a paycheck,” Arum said. “He really believes that he can beat Michael. He’s going through these years, people saying it was politics that got you the decision, and he really wants to prove that he’s the better man.”

If you’ve seen Nikitin fight, amateur or pro, that’s honestly not really in question, Arum isn’t justdoing promoter talk here. Nikitin always fights hard. In fact, he’s a pretty likable fighter, and it’s a shame he’s sort of been cast as a villain due to what happened in Rio.

Arum went on to point out that Nikitin is managed by Egis Klimas, who has a tremendous stable and is one of the top managers in boxing, saying that Klimas doesn’t just serve his fighters up as opponents.

“(Nikitin is) a very hard-working guy, and his manager is Egis Klimas, who is a terrific manager, manages fighters like (Vasiliy) Lomachenko, (Oleksandr) Gvozdyk, (Oleksandr) Usyk, all the Ukrainian guys,” Arum said. “He has a tremendous stable of really, really good fighters. (Sergey) Kovalev is another one. He’s high on Nikitin, and knowing Egis, he wants his fighters to fight and take fights, but he’s not putting them in to lose. He’s courageous as far as his fighters are concerned, but he is not the kind of manager who puts his fighters in to lose just for a payday.”

Arum also took a moment to talk about the Conlan-Nikitin amateur fight, and the long-running problem of officiating in Olympic boxing.

“It was a terrible injustice, but again, Olympic boxing has always had that problem where there is injustice,” he said. “When Holyfield accidentally hit a guy when they said the bell had rang, he lost the ability to win a gold medal (in 1984).

“Then what about Roy Jones (in 1988)? He beat the hell out of this Korean (Park Si-Hun), and when they raised the Korean’s hand, he didn’t know what happened, he was so embarrassed. We have that, unfortunately — politics, because the fighter fights not for himself, but for the nation. Therefore, you’ll always get political decisions. This was a really bad one.”

“We’re gonna get the same problem in 2020 in Tokyo,” he said. “Same problem. I don’t know how you’re gonna eliminate it unless you get judges who are totally independent and not the system that we have now.”

But he doesn’t expect to have the same problem in Belfast on August 3.

“I don’t think even Putin can send guys in here to give him a bad decision,” Arum laughed. “Not here.”