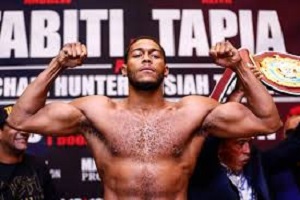 Michael Hunter (16-1, 11 KOs) is obviously a little disappointed he didn’t get the call to fill-in against Anthony Joshua on June 1st, but he’s not letting that get him down. Hunter details to Sky Sports that he nearly landed the title shot against Joshua, but that he’s still looking forward to earning that fight by handling his business inside of the ring.

“Eventually once I keep winning and getting better, eventually I’m just going to rise to the top on my own.”

Hunter would continue by saying he doesn’t think there will be a second chance of him landing a fight of this magnitude based upon a mishap with another fighter (Jarrell Miller’s failed drug test), but says that when he does get his name brought up for another major fight, it’ll because he’s commanded the opportunity.

It’s a refreshing attitude to hear from a fighter in this era of microwaved boxing, where plenty of boxers get undeserved title shots solely for the purpose of handing the reigning champion a layup. Hunter, at least, doesn’t seem to have an issue with doing it the way it was meant to be.