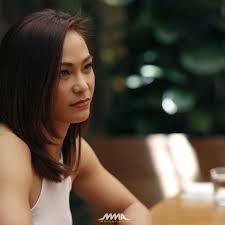 Michelle Waterson had a year to forget in 2017. But now that “The Karate Hottie” has bounced back in fine form with a victory over Cortney Casey at UFC on FOX 29, she’s able to discuss the behind-the-scenes issues that made last year a trying time.

Waterson lost a pair of fights in 2017, to current UFC strawweight champion Rose Namajunasand to Tecia Torres. While training for the Torres fight, Waterson’s father-in-law had an automobile accident which left him paralyzed.

The situation also weighed heavily on the JacksonWink competitor’s mind, which isn’t ideal in a business as intensely focused as professional fighting.

It was a lot of change to process in a short period of time.

Ultimately, Waterson had an epiphany as she pondered her father-in-law’s troubles. She still had the power to do what she wanted to do for a living, so it was on her to go back out and do it.

“In the morning when I’m waking up and going on my runs, you know, I have the ability to get out of bed and go for this run, and my father-in-law can’t even scratch his nose if he wanted to,” Waterson said. “He’s stuck in the hospital. Those are the things that kind of pulled at me and made me kind of look at life run differently.”

With a newfound appreciation for her ability to get through one of life’s more difficult situations, Waterson was back at full force at UFC on FOX 29. While most objective observers found it obvious that Waterson won each of the first two rounds, the scoring, as often happens in MMA, came up as a split decision.

Even then, as the scores were being read, Waterson remained confident.

Waterson also had to fight the a bevy of submission attempts, including a tight armbar.

“I never once was afraid of getting submitted,” Waterson said, “I just, every time she flipped her hips over to do it I was mad at myself for allowing her to get her hips over. But I knew as long as I maintained that position and I held on for dear life with my arms … I just kept telling myself ‘you win, you win this fight Michelle.’”

The fight also highlight something which has become obvious: Waterson, a former Invicta atomweight champion, is undersized for the 115-pound weight class. But she says even if the UFC was to institute a women’s 105-pound class, she’s not convinced she’d make the jump.

“I know I am a natural 105er, but it was my decision to come up to 115 so that I can compete in the UFC,” Waterson said. “In doing that, those are the things I have to deal with. Going into this fight, that was her biggest strength was her size. Every time I go against somebody, if I allow her size to be a determining factor, then I’m feeding into what everything else thinks they’re going to have an upper hand on. So I went into this fight with the mentality size doesn’t matter. We both weighed in at 115. Its equal, we’re just proportioned differently.”

While Waterson obviously wouldn’t want to relive the unexpected stresses her family had to endure, in the end, she believes it has made her a stronger person and a better fighter.

“It’s crazy how your journey takes you where you don’t think you’re supposed to go, but at the end, it’s where you’re supposed to be,” she said. “And i just learned so much, you know, outside of my fight with Tecia Torres there were a lot of things that were going on that was outside of my control. And no matter what you, no matter how you try to prepare, that’s why fighting is so beautiful, because it forces you to ask those hard questions still how do you deal, how do you come out victorious when you still have to deal with all these outside pressures? When you still have to deal with this and that. That’s the life that we live, you can’t come out unscathed.”