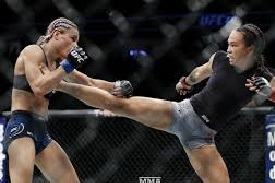 Michelle Waterson can make a strong statement with a third straight win this Saturday in the UFC’s competitive strawweight division.

But “The Karate Hottie” will have to go toe-to-toe with one of the best standup fighters at 115 pounds, one-time title challenger Karolina Kowalkiewicz, to do it. Waterson and Kowalkiewicz meet on the main card of UFC on ESPN 2 at Wells Fargo Center in Philadelphia this Saturday in a matchup that will keep one contender in the title picture and send the other back to the drawing board.

Speaking to MMA Fighting, Waterson was asked if she considered Kowalkiewicz to be among the best strikers that she’s faced based on what she’s seen of the Polish star’s past performances against names like Joanna Jedrzejczyk and Rose Namajunas.

“I would definitely say so,” Waterson said. “She went all five rounds with Joanna and she beat Rose. To me that says that she has a really good MMA game.”

Inside and outside the cage, Waterson has a great deal of respect for Kowalkiewicz. Last July, she shared an image on social media of herself with Kowalkiewicz and future UFC flyweight champion Valentina Shevchenko.View image on Twitter

Having out with some babes @KarolinaMMA and @BulletValentina2,06010:57 AM – Jul 8, 2018219 people are talking about thisTwitter Ads info and privacy

Waterson actually knows Kowalkiewicz from back in their Invicta FC days, where Kowalkiewicz made one appearance and Waterson reigned as the all-female promotion’s atomweight champion. Given the success they’ve had in the UFC, it was only a matter of time before they crossed paths inside the Octagon.

“I feel like even at that point when people were asking me on interviews and stuff, I was asking for her because she is a worthy opponent,” Waterson said. “She’s one of the most well-rounded girls in the top-10 of the division and somebody that has fought everybody and has fought them good. So I thought that it would be a great challenge for me and a way for me to get my name up and above the ranks where I want them.

“But that doesn’t mean that I dislike her. I think she’s actually a really sweet person. I’ve met her when I was actually the champ for Invicta and she was really sweet then. Even fight week, I saw her coming in, signing up, and gave her a hug. I fight because it challenges me and it makes me grow as a person, not because I want to inflict pain on other people.”

A win on Saturday is key to Waterson’s goal of becoming the first fighter to give birth and go on to win a UFC championship. Other women have already attempted to earn this distinction, such as past bantamweight title challengers Cat Zingano and Sara McMann, but none have been successful.

Waterson wants to prove that when it comes to being a mother and being an elite UFC fighter, she doesn’t have to prioritize one over the other.

“I’ve talked to Cat and I’ve talked to Sara on occasion, I just think as fighters we have a common thread,” Waterson said. “But then it just doubled because we have children. Just the understanding of being a mother and what that entails and how much of it is a part of your life no matter what. Just learning how to balance what it takes to be a mother, fully present, and also at the top of your game in an MMA career.

“It’s a hard thing to balance and I think that if I could become the champ, then that would definitely be something that I could be proud of and hold my head up high for the rest of my life.”

It’s anybody’s guess if Waterson is next for a title shot should she get past Kowalkiewicz at UFC on ESPN 2. But she’s looking forward to the opportunities that will come with becoming the No. 1 contender and possibly even the champion of the division.

Waterson, who is of Thai descent, has never fought outside of the United States, and she would love to take a trip to Asia for a championship bout — only she’d like to be the one walking in with a UFC belt around her waist in that scenario.

“That would be amazing,” Waterson said. “The only thing is if I’m fighting for the belt, I would love to be able to have my family close by and I think Asia might be too far of a shot to have everybody come out.