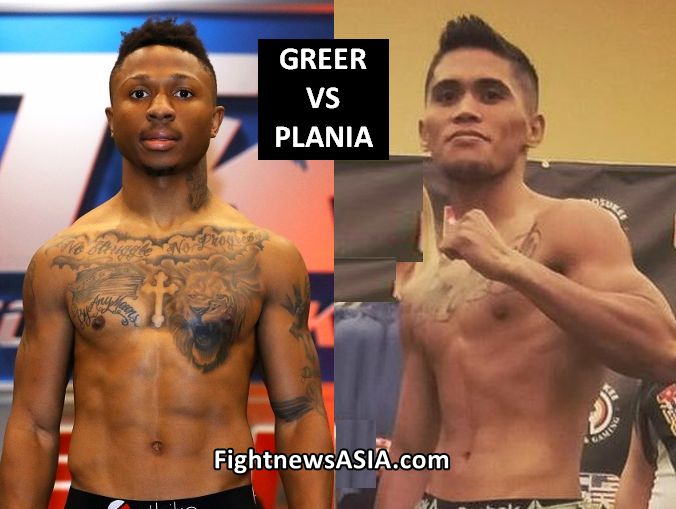 World-ranked Filipino 122-pounder Mike “Magic” Plania (23-1, 12 KO’s), risks his IBF and WBA world ratings as he headlines this Tuesday (June 16), at the famed MGM Grand in Las Vegas, Nevada, against tough American Joshua Greer Jr., in a battle that propels the winner one step closer to a world title shot.

Born in the Tuna Capital of the Philippines, the fast and furious 23-year-old Mike Plania faces in Chicago’s Joshua Greer (22-1-1, 12 KO’s) the most difficult opponent in his 24-fight career.

In his last mission last December, the Filipino made good use of his good punching skills to outpoint Nicaraguan Giovanni Gutierrez (10-1, 6 KO’s ) in Miami.   Prior to that Plania stopped journeyman Julio Buitrago, decisioned Argentinian Matias Agustin Arriagada and defeat Mexican Juan Antonio Lopez in Los Angeles.

This will be Plania’s 6th fight in the U.S.A.

Greer is next in line, and the well-trained Pinoy boxer can’t wait to let his hands going.

Slightly shorter than Plania, the 26-year-old Joshua Greer Jr., is also a world-ranked fighter as well as the reigning NABO 118-pound champion.

Three years ago, Greer’s thrilling 6th round stoppage over James Gordon-Smith was one of the finalist for ESPN.com Knockout of the Year.

Good credentials for Greer.  But they do not disturb the laser-focused Filipino “Magic Man” who has consciously sweated and trained for weeks and is ready for a fantastic door-opening win in Las Vegas.

The winner gets ranked in all four major sanctioning bodies and inches closer to challenge for the world title in the super bantamweight division.

Will the Filipino Mike Plania rock and stop the Chicago native for an awesome televised winning performance in the boxing capital of the world?

Or will the difficult Joshua Greer be able to overcome Plania’s magic?    May the Best Man Win.

The exciting Tuesday evening rumble (Wednesday morning here in Asia), promoted by Bob Arum’s Top Rank, will be aired LIVE in the U.S.A. on ESPN.

The author Carlos Costa of Panama is a veteran fight reporter living in Cebu.  Carlos can be reached at carlos512@hotmail.com, Whatsapp 09184538152 and Twitter: @CarlosCostaBox.