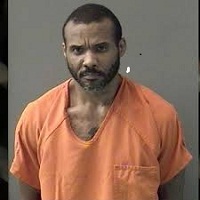 Veteran MMA fighter Cedric Marks, 44, was formally charged with burglary of a habitation with intent to commit other felony/s last Wednesday in Temple, TX (per KCENTV). Marks was re-arrested — after he escaped a police van — last month under suspicion of multiple homicides.

Watch ‘Till Vs. Masvidal ‘ on ESPN+!Stream all the fights LIVE from London — don’t miss a single second of face-punching action! Plus, you get access to the best of the UFC Archives & more! Start Your FREE ESPN+ Trial

Last week’s indictment against Marks is in connection to an August 2018 break-in at the Temple home of Jenna Scott, Marks’ ex-girlfriend. The remains of Scott and her friend Michael Swearingin were discovered in unmarked graves in Clearview, OK in January.

In February, Marks was charged with capital murder in connection to Scott and Swearingin’s deaths. Marks has also been charged with interference with an emergency call, false reporting to a police officer, special investigator, or law enforcement employee, and violation of protection order.

The break-in at Scott’s home happened a month after Scott was denied a restraining order against Marks. In her testimony Scott claimed that Marks was a “pathological liar” and “psychopath” who had choked and threatened her. Scott also claimed that Marks had once bragged that he had experience covering up multiple killings.

Also arrested with Marks in Michigan was his wife Ginell McDonough. McDonough later told authorities that she witnessed Marks kill two people and that she moved Swearingin’s vehicle to prevent police from locating it.

While Marks was being transported to Texas he escaped a prisoner transport vehicle (despite being shackled) while the crew made a stop at a McDonald’s north of Houston. After a nine hour manhunt Marks was recaptured. Marks is currently in Bell County Jail on a $1,766,500 bond. The company that was transporting Marks has since ceased to operate, citing massively increased insurance costs.

In addition to being charged with the murders of Scott and Swearingin, Marks is also a person of interest in the disappearance of April Pease of Bloomington, MN. Pease won custody of her and Marks’ child in a reportedly bitter custody battle in 2008. In 2009, Pease went missing and custody was awarded to Marks. However, custody of the child was awarded to the state soon after.

Marks, who fought once in Bellator, has a 58 pro fight MMA career. His most recent contest was in March of 2018.

Support for survivors of domestic violence can be found from the following organizations:

Rest of the World – HotPeachPages

MMA vet arrested for allegedly robbing home of ex, who has since been found dead