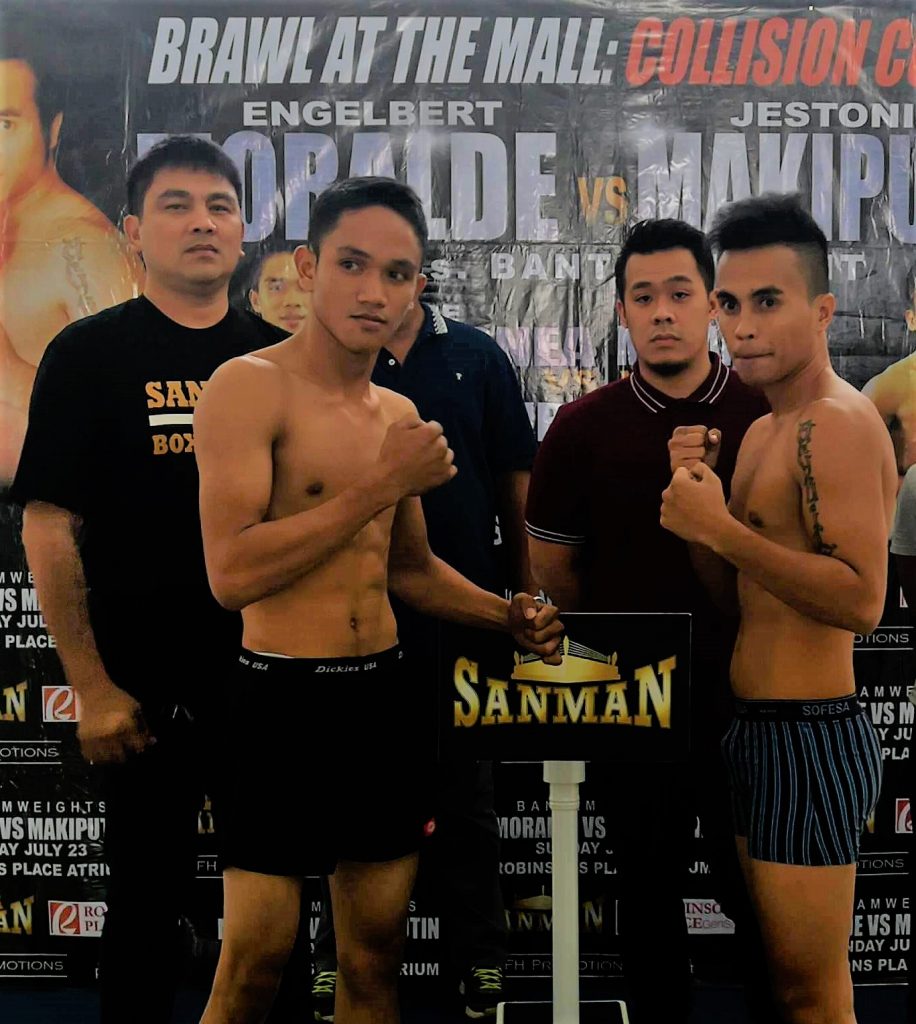 Main protagonists Engelbert Moralde (extreme right) and Jestoni Makiputin make their fighting pose after making their weights. Behind them are promoters Dexter Tan (extreme left) and jim Claude Manangquil of Sanma Promotions in the "Brawl at the Mall: Collision Course" at the Robinson's Mall in General Santos City.

GENERAL Santos City — Main protagonists Engelbert “Aguila” Moralde and Jestoni Makiputin both made their weights for their 10-rounder bout in the “Brawl at the Mall: Collision Course” at the Robinson’s Mall here.
The 24-year old Moralde weighed at 119 lbs. while Makiputin tipped the scales at 117 lbs.
Moralde, a native of Davao City is looking to snap out of a two-fight slump when he battles Makiputin.
Sporting a 9W-5L-0D, 6KOs record, Moralde has been struggling to pile up wins, losing three of his four fights.
In his last outing last March 10, Moralde suffered a technical knockout (TKO) loss to Keita Kurihara in Tokyo, Japan. Before that, Moralde absorbed a unanimous decision loss to Kenbun Torres last December 11, 2016 in Osaka, Japan.
Moralde last tasted a win in September 10, 2016 when he pulled off a unanimous win over Jun Eraham at the Tupi Municipal Gymnasium in Cotabato del Sur.
In stark contrast, Makiputin is on a surge of late after winning three of his last four fights.
Makiputin, who has five wins (3KOs), one loss and two draws is coming off knockout win over Junrey Namion.
The win allowed Makiputin to bounce back from a knockout loss to Sanman’s John Vincent Moralde last August 17 at the Magsaysay Park in Davao City.
Before losing to John Vincent, Makiputin strung up two straight wins, scoring TKO victories over Robert Amlani last March 17, 2013 and Venjie Patac last April 21, 2013.
Pitted in the main supporting bout is a 6-rounder between bantamweights Ben Mananquil (119 pounds) and Kim Lindog (117 pounds).
Mananquil (13W-1L-2D, 3KOs) will be gunning for a fourth straight victory against Kim Lindog (5W-4L-1D, 4KOs) as he gears up for a bigger fight that Sanman Promotions chief executive officer (CEO) Jim Claude “JC” Manangquil is cooking up for him late this year.
“I am planning to have him fight for the OPBF silver title on Sept. 9 versus current Philippine Boxing Federation bantamweight champion Jhalel Payao,” said Manangquil.
Payao, a former WBC Youth World super flyweight champion is stalwart of the Cebu City-based Omega Boxing Gym.
Mananquil pulled off three straight wins after absorbing a split decision loss to Jing Xiang in Haikou, China last December 27, 2014.
Also seeing action are as well as IBF Youth super flyweight champion Jade Bornea (7-0, 4 KOs) against Nicong Calamba (7-24-4) for six rounds.
Flyweight Jerven Mama, who weighed 112 pounds makes his pro debut against winless Roger Salaton (0-3-1)in the flyweight division. The other bout will feature Mark Antonio (1-0-0) against debuting Jeffrey Diale.
The boxing extravaganza put up by Sanman Promotions headed by chief executive officer Jim Claude “JC” Manangquil and chief finance officer Dexter Tan will be streamed live on Facebook via the SANMAN LIVE.
The live streaming will start with the amateur bouts at 3 p.m. The streaming can be viewed by visiting Sanman Promotions’ Facebook page. 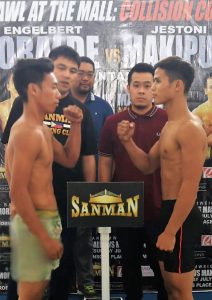 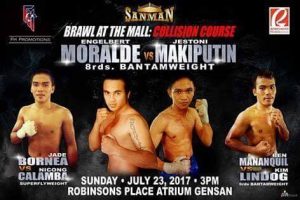