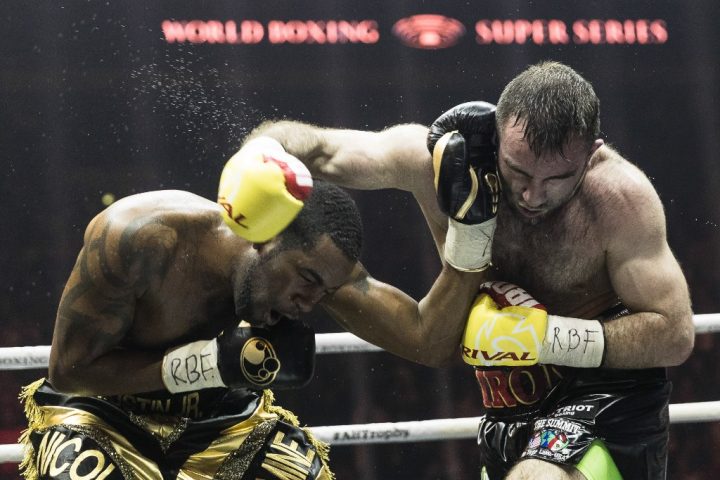 Murat Gassiev will be returning to the ring this summer to make his heavyweight debut on July 27 against an opponent still to be determined on a Matchroom Boxing card, according to Dan Rafael. Gassiev will be fighting on the undercard of WBO light welterweight champion Maurice Hooker’s next title defense. There’s still no location for the card.

The 25-year-old Gassiev (26-1, 19 KOs), a former IBf/WBA cruiserweight champion, hasn’t fought in 10 months since losing a one-sided 12 round unanimous decision to WBC/WBO cruiserweight champion Oleksandr Usyk last summer on July 21 in the final of the World World Boxing Super Series tournament at the Olimpiyskiy, in Moscow, Russia.

Gassiev is now signed with Eddie Hearn’s Matchroom Boxing promotion. He’s pretty excited about having him as part of his game. Immediately, Gassiev gives Hearn a solid fighter that he can put in against a lot of the top contenders in the heavyweight division. Hearn hasn’t said who he plans on matching Gassiev up against. The British promoter has a good stable of heavyweights signed with his Matchroom company that he can put in with Gassiev.

Hearn also has Usyk as part of his stable, although it wouldn’t be a good idea for him to match the two against each other anytime soon if ever. Usyk showed that he has Gassiev’s number last July Unless Gassiev can improve his work rate, and figure out how to throw punches when his opponents are letting their hands go, it wouldn’t be wise move for Hearn to match him back up against Usyk.

Gassiev has major flaws in his game

The blueprint is set in how to beat Gassiev. Yuniel Dorticos, Denis Lebedevand Usyk showed that Gassiev struggles when his opponents throw a lot of jabs and power shots at him. Gassiev just covers up, and waits for his opponents to stop throwing punches before he eventually throws his own shots. At the upper levels of the pro game, fighters need to be able to throw counter shots, and punch in between their opponents’ punches for them to be successful. If they just sit and wait for their opponent to stop throwing punches before they get their own shots off, they’re going to get worked over. Gassiev fights a lot like former two division world champion Arthur Abraham with the way he waits for his opponents to stop throwing before he lets his hands go. Hearn might have made a mistake in signing Gassiev.

Before losing to Usyk last July, Gassiev had beaten Dorticos, Lebedev, Krzysztof Wlodarczyk, Jordan Shimmell, Isiah Thomas and Felix Cora Jr. Gassiev’s punching power was top notch in those fights. What didn’t look good was how economical he was with his shots. Gassiev was waiting too much, and not taking full control of his fights at all times the way he should have been able to do with his punching power.

Can Gassiev improve his punch output?

At heavyweight, Gassiev is going to need to be a lot busier, because he’s not very tall and fast for the weight class. He’s got to be able to attack the bigger heavyweights like Anthony Joshua, Deontay Wilder, Tyson Fury and Dillian Whyte for him to be successful.