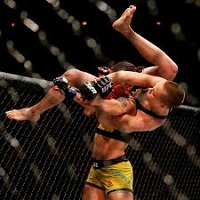 At UFC 237, Rose Namajunas put on one of the finest performances of her career. It lasted almost eight minutes, and ended suddenly when, clinging to a figure-four grip on her opponent’s arm, Thug Rose’s head was violently introduced to the floor. Like Joanna Jedrzejczyk before her, Namajunas outmaneuvered and outboxed Jessica Andrade, and she did so with more than her predecessor’s power. But then Andrade picked her up, and slammed her head against the canvas, and the plywood underneath it.

To some in the online fight world, the outcome was more than a mere twist of fate: it was unfair. Namajunas was busy demonstrating all of the skills she had picked up over the course of a six-year career, when along came Andrade to rudely interrupt her. The Brazilian was clearly on the wrong side of a vast skill gap, and yet she was leather tough and bull strong, and the champion was not. When the former bantamweight got her hands on her, none of Rose’s careful positioning mattered.

Personally, I saw something different at UFC 237. I saw Andrade weather a brutally difficult first round before upping her pace in round two, dragging Namajunas inexorably toward a hard, exhausting fight, and then suddenly knocking her out before the plan could fully mature. But perhaps I only saw things this way because that was how I expected the fight to unfold. In either case, I sympathize with the feelings of those heartbroken by Namajunas’ defeat. When I compare her subtle boxing to the crude clubbing of Andrade, it’s easy to see why some sense a shade of injustice in the result.

In the words of my Heavy Hands co-host Phil Mackenzie, I too have often complained that “athleticism is cheating.” Some people are simply stronger and faster than others, and that means they can get away with a lot that the lesser athletes can’t.

This feeling underlies my hearty appreciation for journeymen and mid-roster fighters. For every Jose Aldo in my personal MMA pantheon, there are two John Makdessis and a Chris Camozzi. Men and women at this level are frequently lacking the kind of ability that separates them from the cream of the crop. While the elite can easily pick up new skills at random and break the rules whenever it suits them, the journeymen must be clever and work hard to develop their craft. Without the room for error that athletic ability grants, their skillsets tend to grow like canyons, narrow but deep.

It’s a painful business, following these fighters. When you prize technique and skill, how do you watch Alex Oliveira smashing Tim Means without cringing? How do you endure Evan Dunham getting his liver torn out by Edson Barboza without cursing the gods?

Forget athleticism, specifically. Talent is cheating. Attributes are cheating. How far would Conor McGregor’s skills have gotten him without his frame? How great would Demetrious Johnson be if he were only 20 percent slower? Robbie Lawler without power? Jon Jones without height? Carlos Condit with a glass jaw?

Youth is cheating. Or do you think Jared Cannonier would’ve fared just as well against Anderson Silva at 36 as he did at 44?

From one perspective, this is a tragic truth of the fight game. A natural law, harsh and cruel. But it’s also part of what makes the sport of MMA so fascinating. In some sense, it’s baked right in. After all, the difference between a footrace and a fistfight is that the man in last place could win at any moment. Doesn’t a comeback KO in the final round sometimes feel like cheating? Whether it’s pure skill or raw athleticism at play, it’s not exactly just when the losing fighter undoes the winner’s hard work in a single, fortunate second.

It’s important to keep in mind that even Rose Namajunas benefits from this reality. She may lack Jessica Andrade’s brute strength and staying power, but she has exceptional reach for her division, and unusual speed. A mid-tier strawweight like Angela Hill will never possess Rose’s power, nor her dynamism. She will never strike and grapple as well as Namajunas can, not in a single lifetime. Yet Angela Hill went three rounds with Andrade, and beat her in the clinch.

And that’s why you root for the little guys. Even when the way is not opened for them, they make whatever path they can manage. In a world where the odds are all too often stacked against you, how do you not valorize the ones who persevere? Especially in a game that tests for will as well as talent, it’s comforting to believe that the odds are never too steep for sheer determination to overcome. Usually, the better athlete wins, and you go to sleep with a feeling of righteous indignation; but every once in a while, an aging Michael Bisping comes along and wipes the smirk off destiny’s face.

So don’t give up hope on Rose Namajunas. If she continues her fighting career, she has more than the outcome of this fight to think on. After all, up to the knockout, she was undeniably winning. Who’s to say whether, in a year or two, she can’t keep that flow going for another two or three rounds? The way Rose was tattooing Andrade’s face, she might not even need that much time. And if all she had to do was let go of Andrade’s arm and grab the fence to survive and win, the same fans lamenting her fate today would applaud her, then. In a game this treacherous, even real cheating doesn’t always feel like cheating.

This is MMA, a brutal microcosm of our own world. It’s unpredictable, it’s cruel, and it’s unfair—and that’s why we love it. Because when you win in this game, it matters.