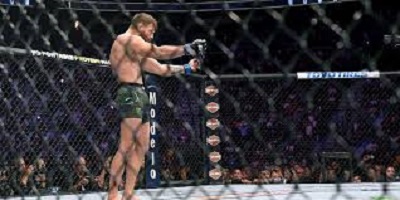 Khabib Nurmagomedov is still not interested in a rematch with Conor McGregor, as ‘The Eagle’ feels fans are only interested in the inevitable drama surrounding the match-up.

All About Conor McGregor

Prior to their lightweight title bout at UFC 229, which saw Khabib submit McGregor in the fourth round, ‘The Notorious’ threw a dolly through the window of a fighter’s bus and, after the fight, ‘The Eagle’ leapt over the cage and attacked Dillon Danis in the stands, triggering an all-out brawl inside the Octagon.

Speaking to TMZ Sports in a recent interview, Nurmagomedov said a rematch would be good for ratings and money but said the outcome would be the same. The reigning, undefeated UFC lightweight champion insists that McGregor must beat some top contenders at 155 before the Irishman challenges for the title again.

Watch ‘UFC 229 – ‘Conor vs. Khabib’Stream all the fights broadcast LIVE — don’t miss a single second of face-punching action! Plus, you get access to the best of the UFC Archives & more!SIGN UP NOW!

“I think people want to see us continue what happened last time,” Nurmagomedov said, per MMA Fighting. “They just want to see drama. If you ask people, ‘Guys, what do you think, who’s gonna win?’ 99 percent going to say ‘Khabib, like he did first time.’ Just people want to see a big drama show, only for this one.

Nurmagomedov went on to say that Ferguson, who he faces at UFC 249, is a much tougher match-up than McGregor.

“I think, just my opinion, my last couple of years, I compete with guys like Barboza, dos Anjos, Conor, Poirier, Iaquinta, all of these guys not tough like Tony Ferguson,” Nurmagomedov said. “That’s why now I feel I have real motivation because before when I watched all these opponents I think like, ‘Okay, I can beat this guy.’ Of course, I work hard, but right now it’s a very, very tough opponent.

“That’s why we focus like always, but right now we have more focus, more hard work. Tony is not like these guys. He’s a little bit tougher than all of them.”