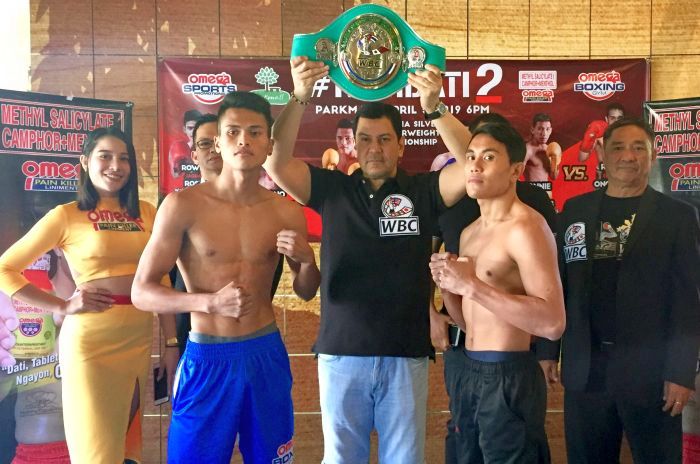 
CEBU CITY, Philippines   —   Weights OK for Omega’s #Kumbati2 @ Parkmall Cebu!   Unbeaten hard-hitting “War Dog” Tomjune Mangubat (10-0-1, 9 KO’s) weighed-in at 125.7 pounds, while tough Iloilo warrior “The Silencer” Arnel Baconaje (10-3, 8 KO’s) came in at a nearby 125.1 lbs for their hot clash for the vacant WBC Asia Silver Featherweight title in the main event of Omega Boxing Promotions #Kumabti2 on Saturday, April 5, at Parkmall Mandaue in the Queen City of the South, Cebu.

“He (Baconaje) has been training hard.   He is in top shape.  And he learned much sparring daily with a big puncher world champion as Sor Rungvisai.”

I did not know that,” said the Mangubat’s trainer Julius Erving Junco of the Omega Gym.

“But some times sparring too hard with a brutal puncher like Sor Rungvisai could hurt instead of help.    We don’t know.     We will have to find out,” said the popular young coach Junco who also trains a number of promising Omega fighters including world-ranked Christian Araneta.

At the end of the battle, who will emerge victorious in this good match-up, the War Dog Mangubat who prepared for combat here in Cebu, or The Silencer Baconaje who trained hard in Thailand?

“I know that my opponent Onggocan is a good boxer.   He was good as , winning titles.  That I know.   So I am happy to fight good player like him,” said “The Thunder Mac Mac Vicelles during the interesting .   “I know it will be a good fight.”

Yes indeed, the vs Onggocan is another good contest:  two 23-year-old skilled southpaws at each other willing to display their fighting talents; fans wondering who will prevail in this one..??  👍👍

THE JAGUAR VS TARZAN KING OF THE JUNGLE

In a third title fight, former WBC Int’l titlist, fearsome predatory jaguar Renz “The Jaguar” Rosia (14-7-1, 7 KO’s) of nearby Cadiz, Negros Occidental, stepped-in at 114.5 pounds for his rumble in the jungle against the dangerous “Tarzan” Ponciano Remandiman (9-4-1, 5 KO’s) of Cebu’s Omega Gym.

So who will win in this one, the predatory Jaguar Rosia, or Tarzan King of the Jungle?

It’s going to be an exciting clash.  Both men aiming for victory.

You have to be there to find out!

Pro fights start at 5 PM, and Philboxing.com will be there.


The author Carlos Costa is a Panama boxing reporter living in the Philippines.   Carlos can be reached by email carlos512@hotmail.com and /:  09184538152.