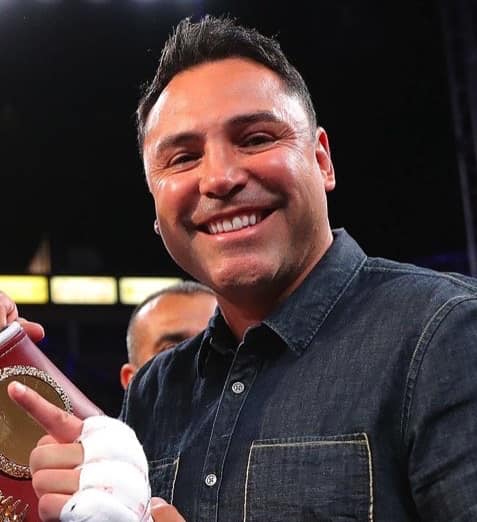 Oscar Says he Wants to Fight Again. Is this Time for Real?

How many times have we heard this before?

But again, Oscar De La Hoya assures that he is ready to return to ring action in the next 6 months for his comeback fight.

Really, this is not the 1st time that Oscar has promised that he’ll fight again, yet, that hasn’t happened.

Still hugely popular, the “Golden Boy” has been 12 long years away from fighting.

I attended that “Dream Fight” between Oscar and “The Pacman” together with my boxing brothers Dong, Gerry, and Dr. Ed at the MGM Grand in Las Vegas back in 2008.

How could I forget that fight? The super fast Pacquiao ravaged and beat up the much slower Oscar during eight solid rounds, forcing the bruised and roughed up “Golden Boy” to surrender on his corner.

Twelve winters have come and gone and de la Hoya wants to lace up the gloves again?

Will this time be for real?

Amigos, I hope not.

Because as a fan I appreciate what Oscar has done for boxing and because in my opinion Oscar really does not need this.

He fought to a legendary Hall of Famer career as a boxer, now doing great as a successful promoter and as a role model for Latino youngsters in East Los Angeles, so why putting his health at risk?

There is no need for Oscar to fight again. He surely is not in desperate need of money, and I doubt that fans are missing him in action.

In fact, it is clear that it is Oscar the one missing so bad the thrill of fighting.

Oscar should more wisely stick to promoting. No need to put his health and life on the line.

Sometimes there are things in life that we can not have any more, and we just have to learn to let go.

The author boxing writer Carlos Costa lives in Cebu and can be reached at carlos512@hotmail.com and WhatsApp +639184538152.