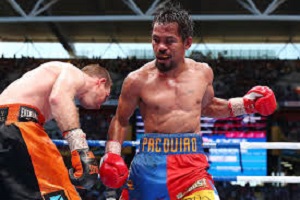 Is Manny Pacquiao-Conor McGregor coming in 2018? Pacquiao is open to it, and says contact has been made.

Perhaps we should all get ready for another circus. Perhaps not. AFP reports that Manny Pacquiao is open to a fight in 2018 with Conor McGregor, and that contact has been made with the McGregor camp.

“If we can negotiate it, I have no problem. It is OK with both of us.” … Asked if he had already approached McGregor’s handlers for such a fight, Pacquiao told AFP, “initially, but we have not yet had any follow-up conversations.”

Pacquiao sent a message out via Twitter a couple weeks ago about McGregor, which raised some eyebrows.

So there’s not as big a story here as it may seem, or as web site headlines will want people to believe so they hungrily click on the link to give us all that sweet, sweet empty traffic.

More substantial is that Pacquiao (59-7-2, 38 KO) indicates he’s going to return to the ring in April, during the Philippines Senate recess, be it against McGregor, Jeff Horn, or even Keith Thurman.

The Senator, who turns 39 in about a week, is coming off of a controversial loss to Horn in Australia, where he dropped the WBO welterweight title. Plans were made for a November rematch, but that fell through because of Pacquiao’s busy schedule outside of the ring.

Manny also says that next fight “could be held in Malaysia, Dubai, or Macau,” which casts some doubt on the reality of this return, since when boxing fans hear things like, “oh, I could fight in Malaysia, Dubai, or Macau,” it usually means the person or people saying that are hoping to fleece a big amount of money to hold a fight in some exotic location, which almost never happens.