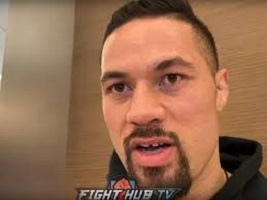 With former heavyweight titleholder Joseph Parker set to return to action this weekend on the Mikey Garcia vs Jessie Vargas undercard, Parker takes a few minutes to share his thoughts on the most recent heavyweight action between Tyson Fury and Deontay Wilder. Check it out…

“Fury came out and put on a dominant performance. He walked him back, he beat him up, and he did the job that he needed to do. And Wilder caught him with a few right hands but he wasn’t able to really catch him. But a lot of people are writing-off Wilder now — Wilder is not a fighter you can write-off. He’s always going to have that dangerous punch, I think he just has to make a few adjustments in his team and in training camp. Listen, he’s still a champion, he’s broken a lot of records and he’ll be back.”

On what he made of Wilder’s costume excuse:

“Listen, he’s a person who’s quite straight-up so if the costume gave him trouble, it gave him trouble. But it’s not sort of the best excuse to use in front of the media, the world. And that’s why people are giving him slack on it.”

On if he wants to see a third Wilder-Fury fight of if the sheen has now been worn off with how dominant Fury was:

On if Fury beats Anthony Joshua: