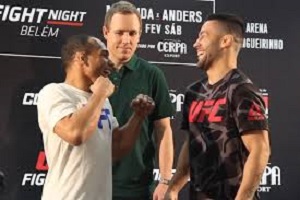 Pedro Munhoz and John Dodson will collide in the preliminary portion of UFC 222 on Saturday night in Las Vegas, but that wasn’t the original date for them.

“The Young Punisher” and “The Magician” were slated to meet at UFC Belem on Feb. 3 in Brazil, but the fight was cancelled hours after the official weigh-ins, as Munhoz missed the bantamweight mark and Dodson didn’t agree to take the fight at a catchweight.

Speaking with MMA Fighting ahead of UFC 222, Munhoz recalled the series of obstacles that caused him to come in overweight at UFC Belem.

”We got there on Monday night and checked in with the UFC on Tuesday morning,” Munhoz said. “They always weigh all fighters and I was 12 pounds over, like I always am for all my fights. I always do the same thing and it always works. It gets a little complicated on the last day, but nothing absurd. I’ve fought at bantamweight throughout my entire career and I never had trouble making weight.

”I’m used to the infrastructure in the United States. Even when I fought a few times in Sao Paulo, Sao Paulo has good hotels with sauna, bathtubs, etc. Unfortunately, we didn’t have the same privilege in Belem. We got to the hotel on Monday night and the first thing my wife did was check if we had a bathtub, and there was no bathtub in my room. I said ‘ok, maybe they put us in the wrong room. No problem, they will give us another room tomorrow.’ I wasn’t worried.

”I met the UFC crew the next morning and they told me there was no bathtub in any room in that hotel, even though they had told me via email three weeks before that that we would have one. If they had told me that before, I’d have changed the way I cut weight and get to Belem a little lighter, or find another hotel or place where I could use a bathtub. I’m used to doing that.

”We had no sauna in Belem, we had no bathtub either. They told us that they would move us to a different hotel on Thursday night, a few blocks away, so we could use a bathtub, so we weren’t worried. I did my weight cut the way I always do, so I was at 139 pounds on Thursday night, only three pounds over the limit. I always leave three pounds to cut in the bathtub.

When Munhoz realized he wouldn’t be able to cut weight the way he always does, he panicked.

”That was a shock for me,” Munhoz said. “I said ‘f*ck.’ I was lost, I didn’t know what to do. I had already cut nine pounds that week, so it’s not like ‘put some clothes on and start to train to cut those three pounds’ because my body is already on its limit. I started to train and workout to try to cut that way, but nothing big. They brought a portable sauna, which is good, but not that strong for final moments like those. I stayed in there for a long time and didn’t sweat, and that’s when I realized there was no way I would make weight.”

In fact, Munhoz claims he didn’t weigh 140 pounds on the scale that day, but 139.4 pounds — with shorts on. “I wanted to strip and weigh in, so I would be at 139 pounds, but (a CABMMA official) said it wouldn’t make any difference because I was already over, and didn’t allow me to,” he said.

Many fighters were aware of the issues the hotel was facing that day, and Munhoz thought his opponent would understand his situation and they would be able to cut a deal.

”My manager contacted John Dodson’s team — they saw what happened in the hotel — and suggested that we do a catchweight bout,” the Brazilian said. “He didn’t accept it. I offered him a deal that I wouldn’t be over 150 pounds on fight night, too, but they didn’t accept. My manager called the UFC matchmaker, Sean Shelby, and tried to make this fight happen in Belem, but there was no deal.

”I flew back home already expecting it to be moved to March 3, at UFC 222, and when I got home they had already sent me the contract.”

The Belem fight was the last bout in Dodson’s current deal with the UFC, and MMA Fighting learned that Dodson wasn’t able to come to terms with the promotion since then, meaning, Dodson will become a free agent following UFC 222. Munhoz believes that fighting out of his contract will “affect the way (Dodson) fights and affect his performance.”

Munhoz and Dodson got a few extra weeks to prepare for this fight since their fight was re-booked to Saturday’s UFC 222. Munhoz continued to train with the likes of Kyoji Horiguchi at American Top Team in Coconut Creek, Fla. The Brazilian says he’s much better this time around than when he was booked to fight in Belem.

”Things happen for a reason,” Munhoz explained. “It wasn’t supposed to happen in Belem, I was upset for a few days, but I’m glad they were able to reschedule it right away. I was ready in Belem, and I’m even better this time. I’ll get there 100 percent prepared for him.

”He likes to move around and do his thing, like he did against (John) Lineker and other guys. But I’m an aggressive fighter, I move forward. I finished the majority of my fights in the first round. He’s a strategist, I’m a finisher, and a lot of my submissions came after I knocked my opponents down. It will be the same thing against Dodson. He’s a small guy, explosive and fast, but I believe in my power.”