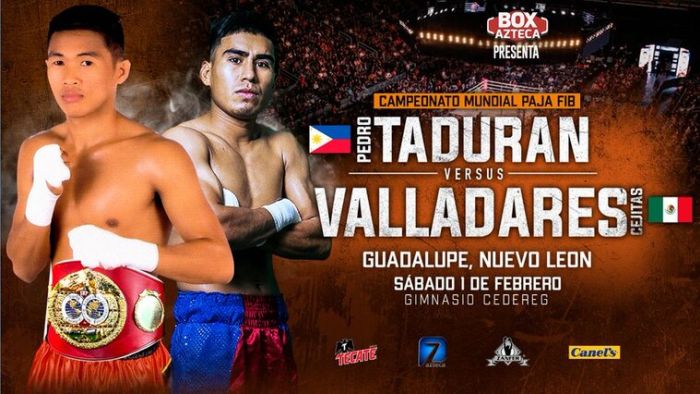 The world title rumble will be the 23-year-old champion’s first defense of the belt he claimed by overpowering in four rounds compatriot Samuel Silva (18-1, 11 KO’s) last September in Manila, Philippines, a fight in which Taduran visited the canvas, just to get up to knock out opponent and conquer the world title.

For the local Monterrey, Nuevo Leon challenger, the battle is his first shot at a world title, though Valladares has been WBC Youh Champion at 108 pounds.   As a matter of fact, Valladares has been done his entire career as a light flyweight.   But he is coming down in weight to 105 lbs to challenge the tough Filipino.

It will be the third time that Daniel Valladares battles a Pinoy warrior.

It was his round four victory over “The Bomb” Araneta, 24, the one win that opened the door for Valladares to battle Taduran for a world title on February 1.

Will “Cejitas” Valladares succeed in deleting Taduran as world champion?   Or will the well-focused Filipino the one to win big behind enemy lines?

The Taduran vs Valladares clash for the IBF 105 pound World Title is a production of Promociones Zanfer in association with Round Zero Promotions, Uppercut Boxing Club of the renowned coach Charro Hernández, and Cerveza Tecate.

The author Carlos Costa is a Panamanian boxing reporter living in Philippines.   Carlos can be reached at carlos512@hotmail.com and whatsapp +639184538152.