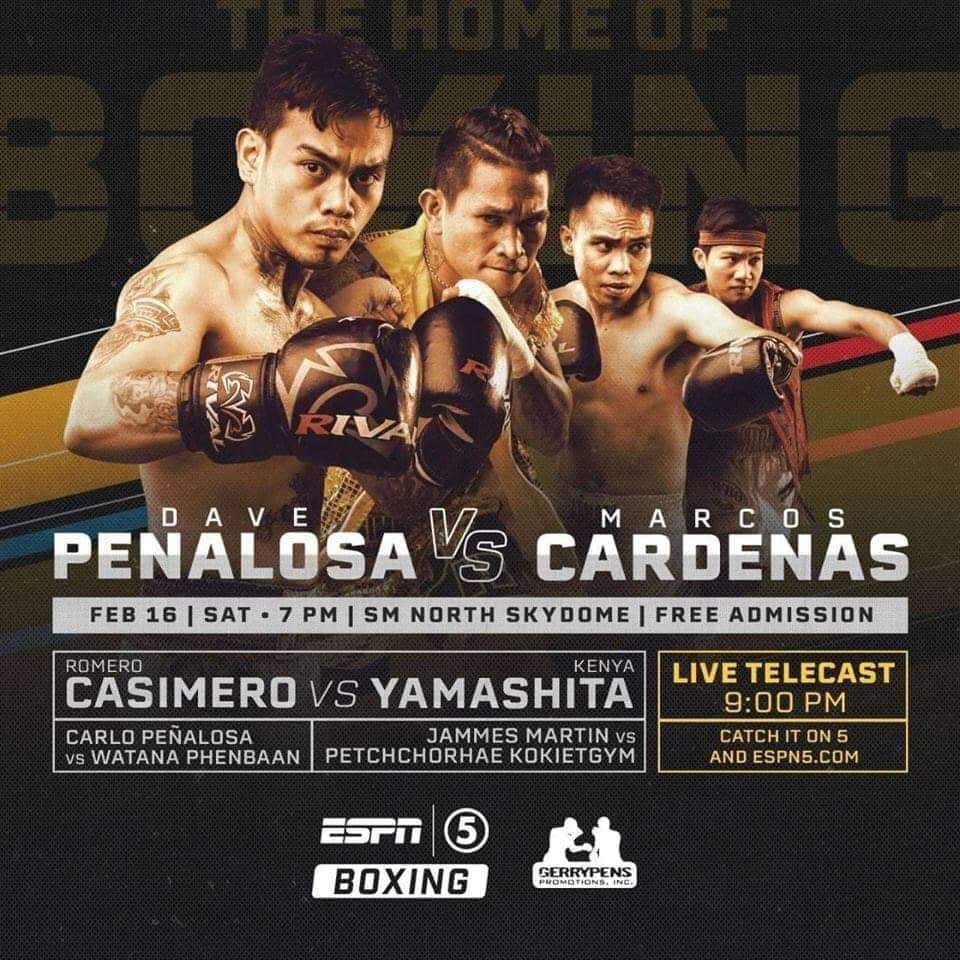 In the televised main event, “The Hunter” Dave Peñalosa (14-0, 10 KO’s), son of former 2-division world champion Dodie Boy Peñalosa, risks it all by taking on more-experienced, hard-hitting brawler “Geraldito” Marcos Cárdenas (19-6-1, 15 KO’s) of Sonora, México, for the vacant WBO Oriental Featherweight Belt, and a place in the WBO 126-pound world-rankings.

A tactical southpaw as his old man, Dave faces his toughest opponent yet in the taller Cárdenas, a step up in class that tests the determination, boxing skills and punching power of the promising Filipino fighter whose father and uncle have been two-division champions of the world.

In the co-main feature, former 2-division IBF world champion Johnriel Casimero – the same man who six years ago ran for his life under a rain of chairs from an angry crowd in Argentina – this time battles Japanese Kenya Yamashita (山下賢哉) of Tokyo in a 10-round duel at a contracted weight of 117 pounds.

Owner of a confusing, complicated fighting style, the 29-year-old Casimero (25-4, 16 KO’s) presses his career forward after a knockout win over an unheralded opponent last July in Tijuana, Mexico; and next in his line of fire is the younger, hard-hitting Yamashita (13-4, 10 KO’s), who has plans of his own.

Will the far more-experienced Casimero dominate the visiting Japanese warrior? Or will the 22 year-old fighter from the Land of the Rising Sun rock the Filipino former world-titlist for the first boxing surprise of 2019 in the Philippines?

The rumble is a golden chance for the Thailander Petchcorhae (17-2, 8 KO’s), a fighting man more tested than the 19 year-old “Wonder Boy” Martin who hails the world-heritage rice terraces mountains of Ifugao in Northern Luzon.

Will the Thai warrior – a former WBC Asian Silver champion – be able to use his strength and ring-savvy to dominate the youthful Martin?

Or will “The Wonder Boy” once more display his speed and devastating power to mercilessly ravage the visiting Thai to continue his climbing in the bantamweight world-rankings?

“TOO SHARP” PEÑALOSA READY FOR ANOTHER THRILLING SCALPING

In flyweights, another Peñalosa is making a splash: 25-year-old “Too Sharp” Carlo Caesar Peñalosa (13-1, 6 KO’s) will be again in full fighting mode when he engages tough-as-nails Watana Phenbaan (18-5, 11 KO’s) of Roi-Et, Thailand in a ten-chapter saga at a contracted weight of 113 pounds.

“Too Sharp” Peñalosa is back in the ring after an electrifying round three demolition work of African combatant Jemsi Kibazange last September at SM EDSA Skydome; and now the 24-year-old Thailander Watana is his new target for scalping. Will “Too Sharp” be too sharp again?

Plus, unbeaten “Demolition Man” Jenel Lausa (7-0-1, 4 KO’s) of Iloilo, fighting out of the Tiger City Boxing Gym in Mandaluyong City collides against veteran Rolly Llino, 29, of Hinatuan, Surigao del Sur, a fighter of the Amoncio Boxing Gym in Taguig. Their six-stanza symphony of leather is in the 126 pound weight-class.

Fights can also be watched online live on ESPN5.com

The author Carlos Costa is a veteran Panama-born fight reporter, living in Cebu. Carlos can be reached by email carlos512@hotmail.com or by whatsapp 09184538152.