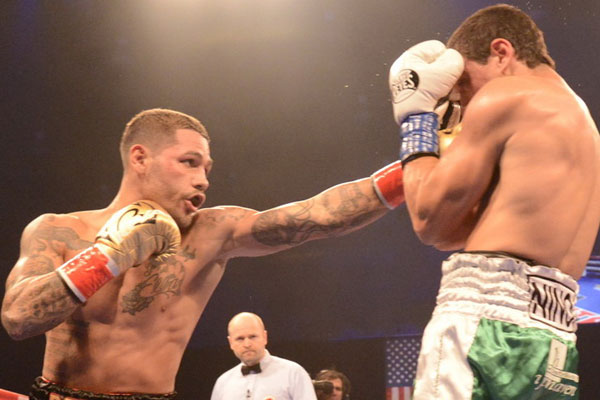 Story and photos by Boxing Bob Newman at ringside

Michael Perez survived a late round knockdown and two badly damaged eyes to eke out Marcelino Lopez over ten give and take rounds, super lightweights. Perez looked to box the Argentine, moving around the ring and avoiding the sweeping left handed bombs of Lopez. For the better part of the fight, the strategy looked to be working. Lopez tried to pin Perez anywhere he could to land something telling. Oddly enough, Lopez’ big moment came in the eighth with Perez backing away in the middle of the ring, guard down. That sweeping left caught Perez on the chin and down he went, almost summersaulting backward. Lopez tried to capitalize, but could not end matters. By the tenth, Perez was like a tiring pitcher trying to protect his lead with no relief in sight. Right eye bulging and cut, streaming blood, left eye looking angry as well, Perez made it to the final bell, but the win wasn’t certain. Judge Don Ackerman tabbed it for Lopez 96-93, while judge Wynn Kintz saw it 97-92 for Perez. Tom Schreck made it official at 96-93 for the majority winner Michael Perez, now 25-2-2, 11 KOs. Lopez drops to 32-2-1, 17 KOs.

Rashidi Ellis and John Karl Sosa opened the ESPN2 broadcast and did not disappoint as they waged a war for 10 hard rounds for Ellis’ IBF North American welterweight title. This bout saw tactics employed with power. Ellis looked to live up to his ring moniker of “Speedy” by using his rapid fire hand speed and deft foot movement. Ellis’ corner implored him to move and stay away from the ropes throughout the fight. When he failed to listen, he paid, as early in the second, Sosa caught Ellis with a blistering combo, snapping the head and wobbling the legs of the title holder. Sosa definitely did the better work upstairs, catching Elis with head shots just enough to make things interesting. Ellis for his part, invested in the body, often times slowing Sosa up, who would visibly look at the round clock, as if to see how much longer he had to deal with the pace. It was a back and forth affair, but in the end, the work rate of Ellis paid off as the judges saw it 95-95 (Don Ackerman), and 97-93 (Tom Schreck and John McKaie), a majority win for Ellis, retaining his title. Ellis moves to 18-0, 12 KOs, while Sosa dips to 13-3, 6 KOs, but has nothing to hang his head about. Ellis knows he was in a fight for sure.