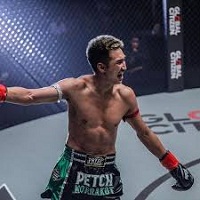 After spending nearly the past 15 years in the sport of Muay Thai, Petchmorakot Petchyindee Academy is embarking on a brand new challenge in ONE Super Series.

For the first time in his highly decorated career, the Thai will enter the cage under the kickboxing rule set on Friday, 8 March.

The 25-year-old will make his premiere in the Thuwunna Indoor Stadium in Yangon, Myanmar when he squares off against Japanese ace Kenta Yamada in a featherweight kickboxing contest at ONE: REIGN OF VALOR.

“Japanese fighters are well known for their toughness,” he acknowledges. “I’m looking forward to the challenge.”

In his most recent outing, Petchmorakot proved to the world that his elite striking abilities can end an opponent’s night in just a single blow.

The two-time Lumpinee Stadium Muay Thai World Champion faced one of the planet’s best competitors, Liam “Hitman” Harrison, in his favored rule set at ONE: DESTINY OF CHAMPIONS in December.

Following a tentative first round, the Thai became more aggressive with his offensive attack. About a minute into the second frame, he put “Hitman” against the fence, used his lead hand to pull down the British athlete’s right arm, and then landed his signature left elbow to knock out his rival. That improved his record to 157-34-2.

However, in his upcoming kickboxing bout with Yamada, Petchmorakot will not be able to utilize his trademark elbow strikes nor the renowned clinch attack he famously utilized while competing in Bangkok’s stadium circuit.

The Ubon Ratchathani native can only rely on his punches, his kicks, and his knees. To better prepare himself for his kickboxing debut, he has made the necessary alterations to his training regimen.

“I’m a little bit nervous about the new rules. It is a brand new experience for me,” he confesses. “I’m focusing a lot on my boxing, and my left kick. I’m also doing a lot of kickboxing sparring as well.”

Other than a few minor tweaks, Petchmorakot will adhere to the tried and tested training methods of Petchyindee Academy, which includes over six hours of daily training.

He will need that in order to defeat Yamada, who holds a professional record of 57-23-6.

Although the 31-year-old Tokyo native will be making his ONE Super Series debut, he has an extensive background in boxing and kickboxing. Ultimately, that experience could play a huge role in the match-up.

“I’ve seen my opponent compete. He’s very well-rounded, and has strong and fast punches. He’s got a good leg kick, too,” the Thai says.

“I plan to use my IQ and ring experience to my advantage. My plan is to first time my left kick. From there, I’ll see how it goes.

“It is exciting for me to get to display my new set of skills to the world. I’m dedicated to making this a memorable performance.”

This bout will also serve as an appetizer for the epic tournament he is gearing up for.

Petchmorakot was recently announced as one of eight athletes set to compete in the promotion’s inaugural ONE Super Series Featherweight World Grand Prix, and his bout with Yamada will prepare him for his future engagement.

“This next fight at ONE: REIGN OF VALOR is a great opportunity for me to warm up my skills as a kickboxer,” he says.

“I’m really grateful to have the chance to compete in kickboxing before the Grand Prix begins.”