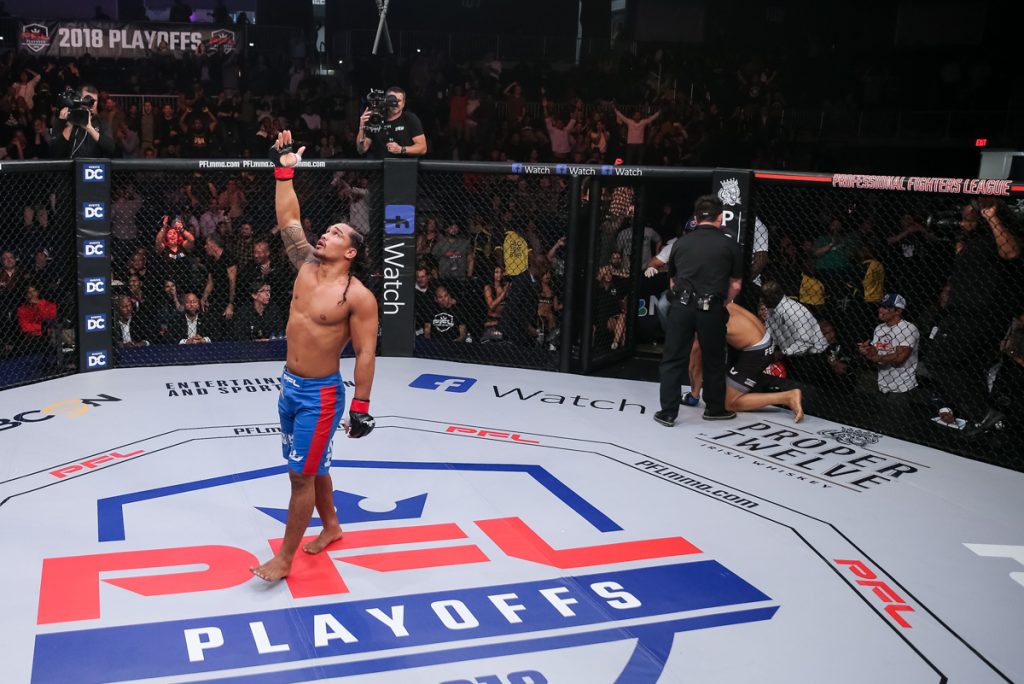 Two more knockouts. One win away from a million dollars.

Ray Cooper III (17-5) continued his torrid run through the inaugural Professional Fighters League season, capping off his fourth consecutive PFL win with a first-round TKO of Handesson Ferreira (13-2-1) in a welterweight semifinal bout at PFL 10 in Washington D.C. on Saturday. 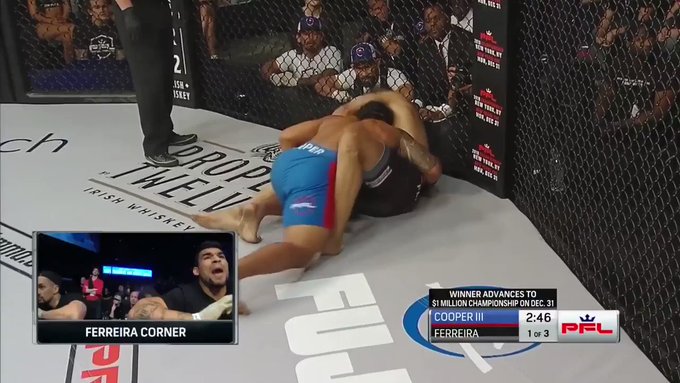 The Braddah Boy cannot be contained! Welterweight Semifinal: #1 seed Ray Cooper III defeats #5 seed Handesson Ferreira by TKO in Round 1. Cooper advances to the PFL 2018 Championship at @HuluTheaterMSG for a shot at $1 Million! #PFLPlayoffs #MMA @HFboydoido

The 25-year-old Hawaiian knocked out Jake Shields (33-11-1) inside of a round earlier in the evening, his second win against the former Strikeforce champion this season, to advance to the tournament finals and a shot at a $1 million prize on Dec. 31. 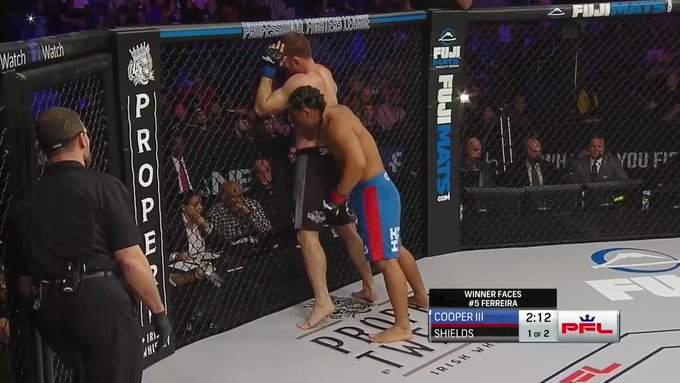 In both of his fights at PFL 10, Cooper’s aggression was simply too much for his opponents. He was repeatedly able to bully them to the mat and once there, his furious ground-and-pound left them with little recourse but to turtle up and wait for the referee to step in. As an added bonus for Cooper, he avenged a previous decision loss to Ferreira from when the two fought at a regional show in Honolulu last November.

Meeting Cooper at year’s end will be Magomed Magomedkerimov (22-5). The threat of Magomedkerimov’s wrestling combined with his excellent distance striking helped him to cruise through the playoffs as he outpointed Pavlo Kusch (23-7) in the quarterfinals before stoppingBojan Velickovic (16-8-2) by second-round TKO in the semifinals. 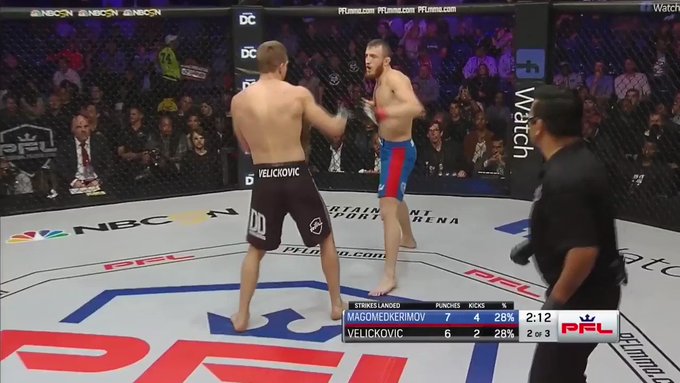 Booking a trip to #NYC on #NYE! Welterweight Semifinal: #3 seed Magomed Magomedkerimov defeats #7 seed Bojan Velickovic by TKO in Round 2. Magomedkerimov advances to the PFL 2018 Championship at @HuluTheaterMSG for a shot at $1 Million! #PFLPlayoffs #MMA @serbian_steel

Magomedkerimov remained perfect in four PFL appearances and the No. 3 seed now has a chance to claim the seven-figure prize.

Velickovic’s run came to an unceremonious end with a winless evening. He initially failed to advance in the tournament after fighting Abubakar Nurmagomedov (15-2-1) to a draw in the evening’s opening bout. Nurmagomedov was set to move on based on him winning the first round, which is the PFL’s first tiebreaker, but Velickovic would take his place in the semifinals after Nurmagomedov was forced to withdraw with an injured hand.

The middleweight finals will see Abusupiyan Magomedov (22-3) fight Louis Taylor (16-4-1), a matchup that did not materialize without controversy.

Magomedov’s path to the top was clear cut. He advanced to the semifinals via first-round tiebreaker after a tepid majority draw against Gasan Umalatov (18-6-2), then used his wrestling and submission skills to dominate a game Sadibou Sy (7-4-1) in Saturday’s main event.

The 39-year-old Taylor also appeared to be working his way to a finals berth before controversy struck in his semifinal matchup with John Howard (26-14-1). In top control in round two, Taylor connected with an illegal knee to the grounded Howard, causing the referee to intervene and a lengthy deliberation to occur. As a physician examined Howard, the commission and PFL president Ray Sefo conferred on how to handle the situation as it looked like Taylor could potentially be disqualified.

Instead, it was ruled that the bout would be halted and declared a technical draw. Judges were asked to score rounds one and two, and since Taylor had won the first round, he narrowly averted disaster due to the league’s tiebreaker rules and will now meet Magomedov in the middleweight finals.

Howard earned his spot in the final four by outpointing Eddie Gordon (8-7) on the preliminary portion of PFL 10.

Also in notable undercard action, Ferreira beat welterweight veteran Rick Story when Story verbally submitted in round two after suffering what appeared to be an arm injury.

See the PFL finals matchups (playoff seeding in parentheses), which take place on Dec. 31, below: