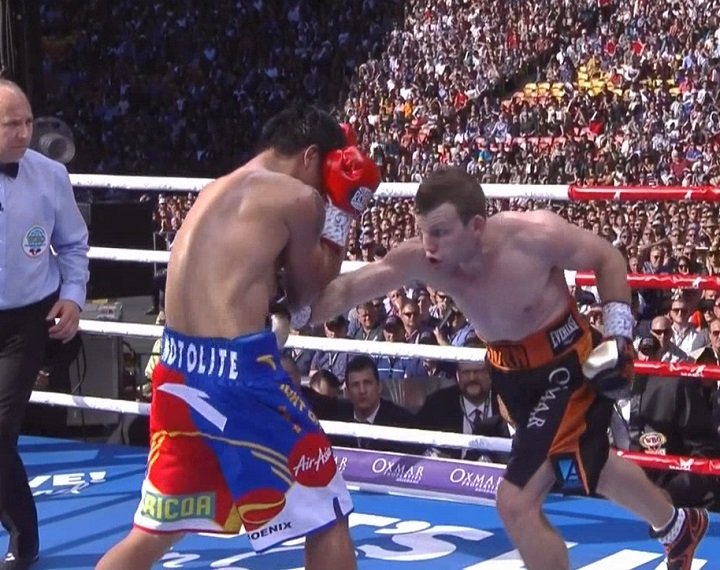 By Gentle Horizons: Eight division world champion Manny Pacquiao (Philippines) and current WBO Welterweight Title holder Jeff Horn (Australia) are set to iron out the details of their rematch which could happen in November or December 2017. As per CBSSports.com, veteran promoter Bob Arum has expressed that 38-year old Pacquiao is open to a rematch: “Manny doesn’t want to retire. He wants the rematch, so we are going to do the rematch.”

However, one of the main details that need to be discussed and agreed upon is the venue for the rematch. While the controversial first match between Pacquiao and Horn ended up with high ratings on ESPN and a massive hometown crowd in the Suncorp Stadium in Brisbane, a lot of boxing pundits believe that a second showdown in Australia would do little to help appease the minds of many boxing fans, who now believe that Horn’s decision victory over Pacquiao was a hometown decision or “robbery”.

Manny Pacquiao himself has floated the idea of doing the fight in his backyard this time around, or in a neutral ground like Las Vegas or the Cowboys Stadium in Texas. Pacquiao told the Manila Times: “We will do our best to bring the fight here in the Philippines as we look also for sponsors. If not here, we’re considering to bring the fight to Dubai or possibly in the United States.”

If the fight pushes through in Manila or anywhere in the Philippines, here are the three (3) top potential venues that could be used to hold the blockbuster rematch:

Located in the heart of Metro Manila, this huge multi-purpose indoor arena was the venue of the Thrilla In Manila fight between Muhammad Ali and Joe Frazier in 1975. It has since been renovated in 1999 and turned into a world class coliseum which has a seating capacity of 25,000 people. The venue has been used for concerts by international artists such as Taylor Swift, Bruno Mars, David Foster, John Legend, and many others. It would be interesting to see Horn fight Pacquiao again in this indoor venue with air-conditioning (unlike the Suncorp Stadium).

This massive venue is dubbed by the Guinness Book of World Records as the largest mixed use indoor arena in the world, which can comfortably house up to 51,898 people (the second largest is the Saitama Super Arena in Japan, which can only house 37,000 people as per Wikipedia.com). This arena was built in 2014 and has since been used for international events, such as the Prismatic World Tour by Katy Perry last May 2015.

With Pacquiao’s strong fan-base in the Philippines and with Horn’s rising name in the field of boxing, they can surely pack a full house in the largest indoor arena in the world.

The Mall of Asia Arena

The Mall of Asia Arena (or MOA Arena) is another deluxe venue in Manila that’s usually chosen for international events because of its proximity to luxury hotels. It has a capacity of 25,000 people and has been used as the venue for recent notable events like the Miss Universe Pageant 2016, the APEC Summit for World Leaders, and blockbuster concerts by Jennifer Lopez, Alicia Keys, Selena Gomez, Britney Spears, Ariana Grande, and many others.

With Pacquiao’s celebrity stature and political influence in the Philippines, this venue can be filled with local high rollers who are willing to pay up to $5,000 per seat.

There are numerous other potential venues in the Philippines for a Pacquiao-Horn rematch such as the Ynares Center and Cuneta Astrodome just to name a few.

Jeff Horn and Bob Arum are really pushing for the fight to happen again in Australia, because they probably want to solidify and legitimize Horn in the eyes of the boxing world by giving him another huge hometown advantage. I think it’s best for Arum to test the mettle of Horn by letting him fight in a venue outside Australia for the first time in his career. If Horn shows signs of struggling or getting beat up when fighting away from home, then he probably shouldn’t be the new cash cow that Top Rank is looking for. If he can’t fight well anywhere outside Australia, how can he fight in a big stage like Las Vegas?

It remains to be seen whether Top Rank will give Pacquiao some proper treatment this time by giving him a chance to vindicate himself in front of his own crowd. If Pacquiao wins the rematch, then a rubber match can be set in Las Vegas for possibly Pacquiao’s final PPV fight, and Horn’s first. But holding the rematch in the Philippines is still a long shot at this point. Jeff Horn’s team is really reluctant to give up hometown advantage because at this point, that’s the main thing that’s really going on for him in boxing. Aside from his highly physical game, Jeff Horn needs a hometown boost for his fights, so it would take a big purse increase for Horn to be willing to leave Brisbane and fight Pacquiao in Manila.