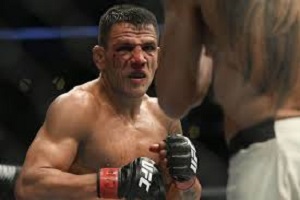 Former UFC lightweight champion Rafael dos Anjos brought himself back in the win column on Saturday with a fourth-round submission victory over Kevin Lee. Yet, despite a strong finish, his performance came with criticisms.

A former would-be opponent in Conor McGregor took time to criticize his win in a post-fight Twitter jab, bringing up dos Anjos’ pull-out from their scheduled 155-pound title fight at UFC 196 in 2016. Dos Anjos is not really the type to throw shade at other fighters, but he did respond to “The Notorious” via Twitter, hitting at the latter’s whisky endeavor.

That broken foot is my working tool.Making fun as a fellow fighter shows the person you r.Before sleep you wonder what life would’ve been if that fight happened and I made you eat that foot.Enjoy your fortune drinkin that brownwatercheapwhiskey without making fun of my misfortune Conor McGregor ✔ @TheNotoriousMMA Lol my bad, I didn’t know it was actually just a bruise. https://twitter.com/zappalek/status/1129951918627987456 … 2,639 4:00 AM – May 21, 2019Twitter Ads info and privacy 439 people are talking about this

Despite two failed attempts to make a McGregor fight happen, “RDA” remains eager to face the Irishman sometime in the future. The 34-year-old Brazilian says he is even willing to make a one-off drop to 155-pounds if needed, despite his major weight-cut struggles in the past.

With the win over Lee, dos Anjos snapped a two-fight losing streak, as he now holds a record of 29-11 (with 15 wins by stoppage).