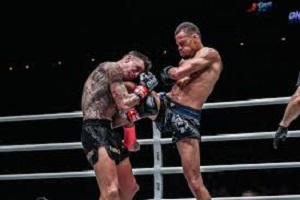 The best way to become a legend is by defeating a legend, and that is exactly what Regian “The Immortal” Eersel did at ONE: ENTER THE DRAGON.

On Friday, 17 May, the Dutchman unloaded a full arsenal of weaponry to out-duel his legendary compatriot Nieky “The Natural” Holzken over the course of five rounds to claim the inaugural ONE Lightweight Kickboxing World Championship.

Once the action got underway, Holzken immediately set the pace with a blistering series of kicks to his countryman’s lead leg.

Eersel answered back by using his long reach in an attempt to keep “The Natural” on the end of his punches and never letting the ultra-aggressive veteran settle into a rhythm.

Still, Holzken was able to make the necessary adjustments to continue firing with volume and power, all while mixing in some flashy strikes like a spinning heel kick, which connected with a smack against the 26-year-old’s head.

With both athletes looking to control the pace, each man came out aggressively at the start of round two.

While Holzken attempted to close the distance, the Sityodtong Amsterdam representative utilized his reach to his advantage and then exploded forward with a slew of jumping knee attacks.

“The Natural” was not going to be deterred, however. He kept looking for an opening for his combinations, and even unleashed a lightning-quick spinning body kick late in the stanza.

Although Holzken found success through the first six minutes, Eersel’s constant pressure started to chip away at his conditioning in the third round.

“The Immortal” had an outpouring of offense throughout the frame, as he blasted a punishing series of knees to the 35-year-old’s body, and then went up top to the head repeatedly.

Eersel’s output gave Holzken problems. He did everything possible to defend, but fired back with counters less and less.

The work that the Sityodtong Amsterdam product did throughout the first three rounds paid off in the fourth stanza, when he landed the biggest shot of the entire contest.

After spending so much time backing Holzken up with his fierce combinations, “The Immortal’ uncorked one perfectly-timed knee right up the middle, which blasted the Dutch icon and sent him stumbling down to the canvas.

While “The Natural” was quick to get back to his feet, it was clear Eersel’s game plan was paying off, as he never allowed the former Kickboxing World Champion to use his trademark aggression to control the pace.

The knockdown also put Eersel up on the scorecards, but he had no intentions of just cruising to victory. He continued to trade shots with his veteran adversary throughout the final three minutes.

Knowing that he was likely down in the fifth round, Holzken went for broke — he even launched a huge head kick, which clipped Eersel and brought the crowd inside the Singapore Indoor Stadium to their feet.

“The Immortal” may have been rattled for a split second, but he never let his opponent see him wavering. Instead, he came back with even more volume in his unyielding attacks until time finally ran out.

While it was a battle through all five rounds, the judges gave the unanimous decision nod to Eersel and awarded him with the inaugural ONE Lightweight Kickboxing World Championship.

“I’m here to protect this belt as long as I can,” he said following the victory.

It was a statement performance for the 26-year-old kickboxer, who defeated one of the best to ever lace up the gloves. Now, with a 54-4 professional record, it will be awfully tough to dethrone “The Immortal.”