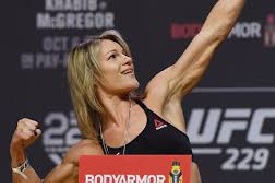 It’s looking like UFC 238 is going to feature a very strong push for the UFC’s women fighters. While there are only five bouts reported for the Chicago PPV card, so far four of them are highlighting top-ranked women’s strawweights and flyweights.

In the headliner, flyweight champion Valentina Shevchenko looks set to make the first defense of her title against Jessica Eye, with a bout between Katlyn Chookagian and Joanne Calderwood primed to decide a potential next contender. Fast rising strawweight prospect Tatiana Suarez is set to take on Nina Ansaroff, who is on her own surprising four fight winning streak — having lost her first two bouts in the UFC.

Now, Combate reports that another bright prospect at 115 lbs is set for a test against a veteran opponent. China’s Yan ‘Nine’ Xiaonan will will take on former Ultimate Fighter season 20 competitor – and current 12th ranked strawweight – Felice Herrig.

Herrig enters the bout on a two fight losing streak, having dropped a very close split decision to Karolina Kowalkiewicz, before turning in a dissapointing performance against Michelle Waterson back at UFC 229 in October of last year. Those losses broke a four-fight win streak for the ‘Lil Bulldog,’ including victories over Alexa Grasso and Cortney Casey.

For Xiaonan, Herrig will be the fourth opponent in the 29-year-old’s Octagon career. She’s currently riding a nine fight unbeaten run (including a No Contest against Emi Fujino just before her UFC debut). And she’s picked up wins against Kailin Curran, Viviane Pereira, and Syuri Kondo along the way. That will make the fight against Herrig a real step up in competition for the China Top Team fighter.

UFC 238 is set to go down in Chicago, Illinois, on June 8th. Stay tuned to Bloody Elbow for more news and notes on the card as it approaches.