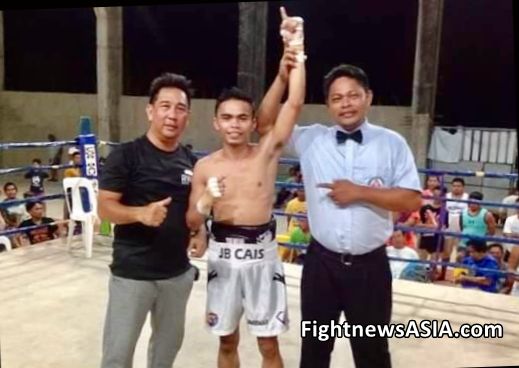 In the first bout of the evening, unbeaten 20-year-old Boholano Jimmybie Cais (3-0, 1 KO) outclassed Mindanao warrior Jerry Tabago (1-6, 0 KO’s) of Koronadal City, Cobatato del Sur. The two gladiators roughed it up in their six-round battle in the minimum weight division with Cais coming on top for a unanimous decision win.. The referee was Delbert Pelegrino of Bohol.

In the co-main feature, promising minimumweight Roldan Sasan (8-1, 3 KO’s) of Carmen in central Bohol dominated and outclassed for a second time tough Davaeño man of steel Dave Maningkil (5-10-2, 1 KO) during their in a scheduled 8-rounder melee.

The two men already battled it out hot in a thrilling non-stop 2017 war in Talibon, northern Bohol. In the climax of that first encounter, Roldan stopped Dave in the eighth and final round. This time around there was no knockout, though Sasan was clearly again the superior fighter.

Still, fans loved their big rumble, and Roldan and Dave might do it again.

In one of the hot undercards, Boholano super flyweight Anthony Galigao — who hails from the flourishing and charming town of Batuan, the gateway to the world-famous Chocolate Hills — unleashed a heavy storm of fire against fearless Belmar Plaza of Cebu City by way of Lanao del Norte, rocking Plaza out in four chapters

After the stoppage win, Galigao (9-13- 4 KO’s) feels ready for more exciting imssions. The collision was a scheduled non-title eight-rounder fight in the 105-pound weight class, but it did not go the distance.

Fights were sanctioned and supervised by the Games and Amusement Board (GAB).

The entertaining “Engkwentro Sa Cogtong II” on May 27 in Cogtong, Candijay, eastern Bohol, was an effort of Edgar Lacierda Ricafort of Boxing and veteran man of boxing Naris Singwancha of coordination with Candijay’s Barangay Captain Hon. Tata Olandria.

The author of this story Carlos Costa is a Panama boxing reporter living in the Cebu.. Carlos can be reached at carlos512@hotmail.com and whatsapp/viber/wechat: +639184538152.