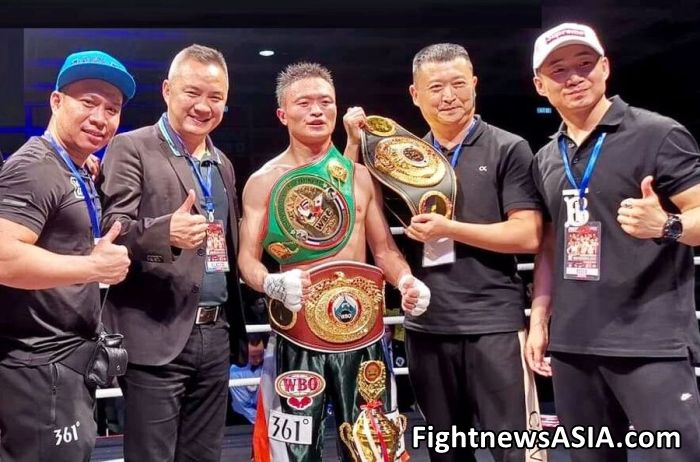 Trained solidly during the last three months by his Filipino boxer Ninolito Jalnaiz, the Chinese Xiang Li engaged the local Hong Kong star Raymond Poon in a non-stop close-quarters melee that on the edge of their seats throughout chapters war.

of the combat took turns as the local Raymond —    energized by his tons of fans screaming his name   —   fought back attempted to overpower Xiang Li, but to no avail, as the was solid in his strength, speed, throughout the rough game.

Even though the bravery and warrior-spirit of Raymond Poon were evident, it was also crystal clear that Xiang Li did enough merits to nod by six round to four, which was the sensible and reasonable score provided by one of the judges.

Plus, unbeaten Japanese featherweight Ren Sasaki (9-0, 6 KO’s) scored a round six TKO over coming-forward brawler Ge An Ma (6-1, 1 KO) of Dalian in northeastern China.    Official time of stoppage was 1:53 in round 6.   The third man was Mekin Sumon of Thailand.

Moreover, Hong Kong’s hard-punching super lightweight Nibesh Ghale (5-1, 4 KO’s) stopped Japanese Shogo Yamamoto (4-4, 1 KO) in four chapters for a TKO win.    Ghale was the dominant factor from the getgo, becoming more and more damaging in his demolition work as rounds went by.   The crushing end came at the 2:29 minutes mark 4th stanza when referee Mekin Sumon of Thailand waived the fight off.

Matchmakers for the entertaining evening of boxing were Alan Chau and Aku Zhang.

The televised card Sunday, May 12, in Hong Kong, S.A.R., was a production of award-winning Hong Kong promoter Jay Lau, head of DEF Promotions in association with Nike Hong Kong.

The author Carlos Costa is a Panama boxing reporter living in the Philippines.  Carlos can reached at carlos512@hotmail.com and whatsapp/viber/wechat:  +639184538152.