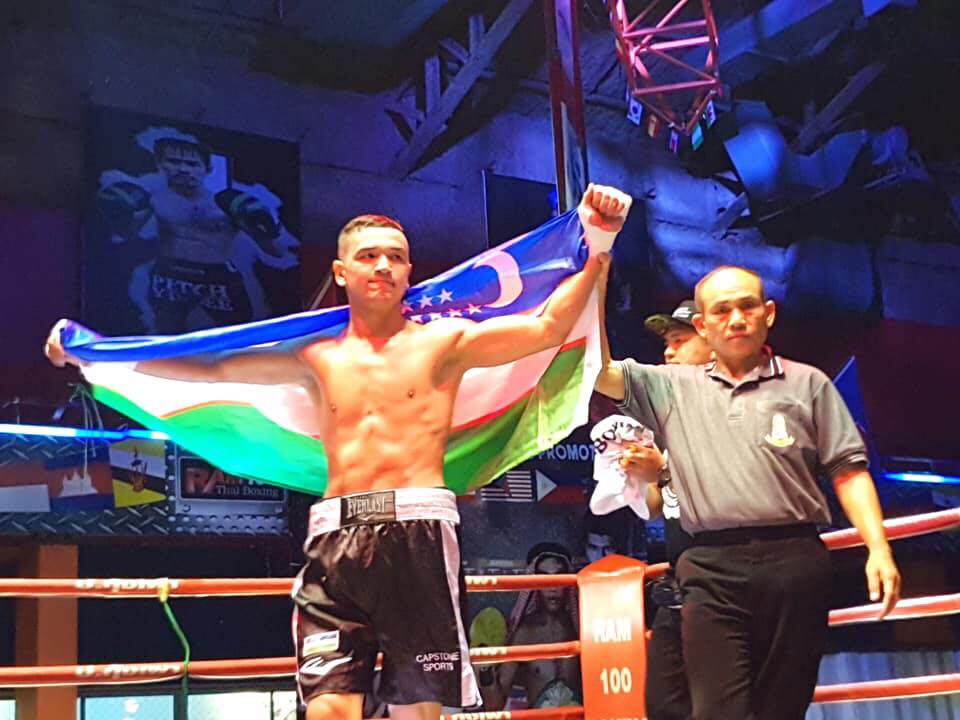 In the main event, 19 year-old welterweight Ulugbek Sobirov recorded his fifth knockout in seven combats as he persued and landed hard on his more experienced Thai opponent Theerawat Yoohanngoh (19-9, 13 KO’s) who battered did not come out to the sound of the third round.

It was another riveting stoppage win for the young Uzbek who trains in Malaysia with coach Lixer Paingco under the banner of Vladimir Boxing.

In the co-main feature, Uzbek 147-pounder Jasur Akhmadjonov (6-0-1, 4 KO’s) shocked and dismantled Phairin Sukmuang of Thailand with a vicious blow to the liver that roughly gassed out the Thai warrior rocking him down to the blue canvas in agonizing pain in the very first chapter.

In her first fight, the tall good-looking Napaporn got knocked out in two rounds by unbeaten Australian Cherneka Johnson (10-0, 5 KO’s), but tonight Napaporn is a winner.

Plus, Muay Thai flyweight Wachira Malai debuted with success in pro boxing as he recorded a split decision over coming forward 17 year-old Awirut Chaladloes, who loses his second combat in two tries.

The Supervisor for the Professional Boxing Association of Thailand (PAT) was Royal Thai Army Coronel Damrong Simakajomboon, and the Ring doctor was Dr. Jirasak Bubpachart.

The author Carlos Costa is a Panama-born Fight Reporter living in Cebu, Philippines. He attended this boxing event in Bangkok, Thailand. Carlos can be reached by email: Carlos512@hotmail.com and WhatsApp/Viber: +639184538152.