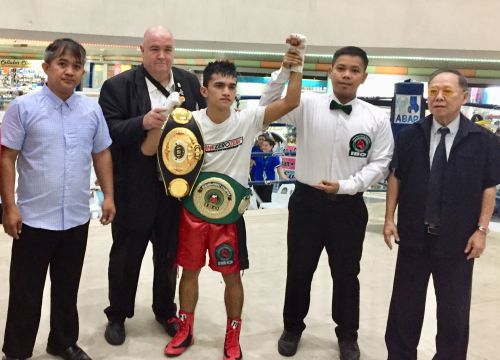 Zulueta boxed superbly well from the distance, landing jabs and combinations with accuracy and speed throughout the fast-paced combat that delighted fans in attendance.

Aton visited the canvas once in a flash knockdown in the fourth stanza, though he did not appear in trouble, getting back to his chase of Zulueta who was far too elusive and effective both initiating attacks as well as in the counters.

At the end of actions, the three judges saw the battle by wide margins in favor of Zulueta, and the young warrior from Bacolod City appears ready for more exciting challenges.

“Aton was a good and strong opponent. I could feel the power in his punches, but I boxed him good” commented the winner John Michael Zulueta, now double ABF Asian and IBO Oceania and Oriental titlist.   The referee for the IBO was Jerrold Tomeldan.

In the brutal co-main feature, tough southpaw Joepher Montaño (10-4-2, 8 KO’s) of nearby Bago City, Negros Occidental, catapulted the bigger, more experienced Rodel Wenceslao (13-18-2, 5 KO’s) of Kananga, Leyte, to dreamland with an electrifying right hand in the sixth chapter that Wenceslao could not have imagined, as it was him the aggressor throughout the fascinating fight.

During the first five chapters of hostilities, fans saw Wenceslao pressing the action forward throwing power punches over Montaño who was fast getting worn out, resorting to desperate hit-and-hold techniques to avoid the damaging blows of the bigger man wanting to damage his head and body.

But in round six  —  right in the center of the ring  —  Montano unleashed the biggest punch of his life, a perfectly placed right straight to the chin of the incoming Wenceslao that rock the big man to the bones, propelling him down to the hard canvas head first.

A visibly hurt and weakened Wenceslao attempted to get up from down there, failing miserably, hitting his head again against the floor where he stayed motionless for a few seconds in some unknown dimension.

Seconds later, thankfully, Wenceslao regained consciousness and was helped back to his feet… eyes not yet fully focused, though getting better.

In another rumble, Rodel Sioco, in his second pro fight, overpowered Gerald Condes in their saga in the super flyweight division.

Plus, local Bacolod warrior Ricky Delos Santos, 19, came back up from a knockdown by the ropes to win a hard-fought unanimous decision over relentless rookie Romeo Anselmo of nearby Antique.

The three judges scored identical 38-37 in favor of Delos Santos.   The third man was veteran referee Samson Libres of Bacolod.

Supervisor for the IBO was New Zealand’s Steve Scott, Vice President of the IBO for Pacific; and the men in charge for the Asian Boxing Federation (ABF) were Naris Singwancha and Surapot Pongchiwanich of Thailand.

“Battle of Undefeated: Ariston Aton vs John Michael Zulueta” for the IBO Oceania and Oriental Title was a production of award-winning promoter Brico Santig of Highland Boxing Team in association with of boxing former GAB Chairman Juan Ramon Guanzon, and Thailand boxing patron Naris Singwancha, director of the Singwancha Foundation.