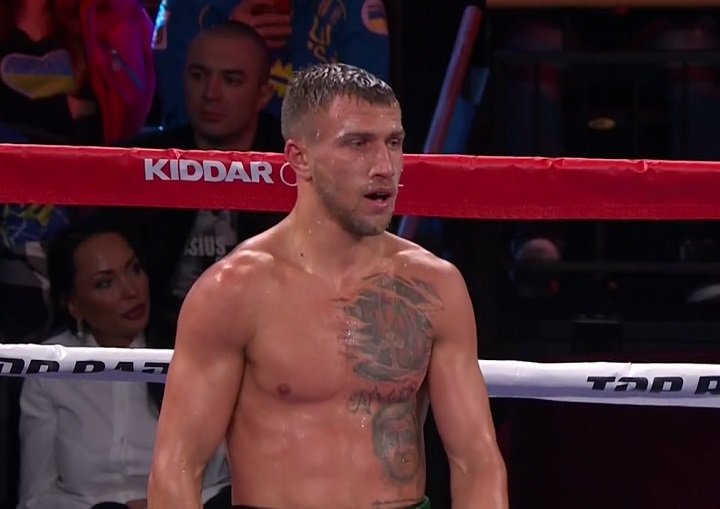 By Chris Williams: Vasyl Lomachenko (8-1, 6 KOs) is defending his WBO super featherweight title this Saturday night on August 5 against the recently beaten featherweight Miguel Marriaga (25-2, 21 KOs), and lightweight champion Mikey Garcia’s trainer Robert Garcia is not pleased about the fight.

Robert sees the Lomachenko-Marriaga fight as beneath Lomachenko, as he’s fighting Marriaga (25-2, 21 KOs), a fighter that was beaten soundly in losing a 12 round unanimous decision in his last fight to WBO featherweight champion Oscar Valdez on April 22.

The location of Saturday’s Lomachenko-Marriaga fight is at Microsoft Theater, in Los Angeles, California. Where to see the fight is on ESPN.

There’s not a lot of interest from the boxing public in the Lomachenko vs. Marriaga fight. Usually the interest in particular fight is started by the hardcore boxing fans and then it spreads to the casual fans. The hardcore fans aren’t eager to see Lomachenko fight Marriaga, because they just finished seeing Marriaga lose to Valdez. If Top Rank wanted to make an interesting fight, they would have been better off matching Oscar Valdez and Lomachenko together.

Marriaga was knocked down in round 10, and lost that fight to Valdez by the scores 119-108, 118-109 and 116-111. The fight wasn’t as one-sided as the scores would indicate, but it was still a clear win for Valdez. Robert Garcia is frustrated that Lomachenko keeps talking about wanting to fight Mikey Garcia, but then he doesn’t move up to fight him at lightweight.

Lomachenko keeps waiting. Lomachenko fought Jason Sosa in his last fight on April 8 in beating him by a 9th round stoppage. That fight wasn’t a big deal. Lomachenko would have gotten a lot more attention from boxing fans if he’d moved up to lightweight and squared off with Mikey.

Top Rank was hoping to get the 36-year-old Orlando Salido for Lomachenko, but he couldn’t take the fight due to him dealing with a hand injury. Lomachenko wants to avenge his loss to Salido from three years ago in 2014. It’s unclear if Lomachenko is purposefully staying at 130 to wait for Salido to fight him. I don’t think it matters anymore.

Lomachenko won’t prove anything by beating Salido at this point, because he’s not the same fighter he once was. Salido is about to turn 37, and he hasn’t won a fight in over 2 years. There’s no point any longer in fighting him. Lomachenko can’t crow about beating a nearly 40-year-old Salido and act as if he would always beat him. The boxing world already witnessed Salido beat Lomachenko when he was in his prime three years ago. Lomachenko was clinching like crazy all night long because he couldn’t handle the body shots Salido was hitting him with. Salido took Lomachenko to school and gave a lesson in body shots.

Lomachenko vs. Marriaga will be fighting this Saturday night on ESPN. It’s unclear how many boxing fans will be tuning in to see the fight. There hasn’t been a lot of publicity about the Lomachenko-Marriaga fight. The chances are the boxing fans will be doing other things on Saturday night rather than tuning in to see Lomachenko defend his WBO super featherweight title against Colombian Marriaga.

It’s odd that Lomachenko’s promoters at Top Rank have decided to match him up against a fighter that was recently beaten in Marriaga instead of someone that deserves a world title shot. Even if Lomachenko has no desire to move up right now and risk his hide against Mikey Garcia, he should at least be fighting a contender that hasn’t just lost in his last fight.

Fighting Marriaga just seems like a race to the bottom. If this were the NFL, we’d be seeing a team that just lost going to the Super Bowl, The fans wouldn’t like that too much unless they weren’t following the sport too closely weren’t aware that the team had lost their last fight. Perhaps that’s what Top Rank is counting on. If the casual boxing fans don’t have a clue that Marriaga was whipped in his last fight by Valdez, then they might get excited at seeing Lomachenko fight him.

Robert Garcia brings up a good point. It’s not a good look for Lomachenko to be fighting Marriaga. Is this what it’s come to for Lomachenko? He turned pro and big things were expected from him. Instead, he’s about to turn 30, and he’s fighting a guy that was just beaten in Marriaga on ESPN. It’s a bad fight for Lomachenko. He should have moved up to lightweight to face Mikey Garcia by now.

Whose fault is it that Lomachenko is fighting Marriaga instead of Mikey Garcia? It is Lomachenko’s promoters at Top Rank? is the promotional company keeping their fighter Lomachenko safe from Mikey Garcia, hoping they can turn him into a star by matching him against fighters like Marriaga and Jason Sosa. Is it Lomachenko who doesn’t want to fight Mikey?

Is Lomachenko just satisfied with getting nice paydays fighting the guys that Top Rank puts in front of him risk free? Without any real risk of losing, Lomachenko can keep the paydays coming for a long time. If Lomachenko steps up to fight better quality fighters by moving up to lightweight to fight Mikey Garcia or Robert Easter Jr., he could lose to them, and that would hurt his career potentially.

“Lomachenko used to be my favor, but I had to stop picking him as by No.1, because I’m disappointed he’s fighting Marriaga,” said Robert Garcia to ES News Reporting. “That guy just lost and he got beat by a featherweight,” said Robert in referring to Marriaga’s recent defeat last April to WBO featherweight champion Oscar Valdez. “That’s a turnoff there, and I’m sure a lot of fans feel the same way.”

It’s not hard to predict which direction Top Rank goes in after Lomachenko beats Marriaga on Saturday. They’ll likely look to make the Lomachenko vs. Salido fight after that. I don’t think they’re interested in making a fight between Lomachenko and Mikey Garcia. For the boxing fans that don’t remember, Garcia used to be with Top Rank. He had promotional issues with them, and he was out of action for 2 ½ years clearing that up. I don’t believe that they’re going to put Lomachenko in with Garcia. That’s why it’s better for Mikey to forget about Lomachenko and focus on fighting other guys. If Mikey wants to stay at lightweight, then so be it. There is a small number of fighters that Mikey can fight there. I’d be surprised if Garcia can get one of the champions to fight him in 2017.

“He said it before that he wants to move up to 135 and fight Mikey,” said Robert about Lomachenko. “Mikey is a champion at 135. There was nothing good for Mikey at 135, so that’s why he took the fight at 140 [with Adrien Broner]. So if there was nothing good for Lomachenko at 130, why does he have to fight a featherweight? Why didn’t he go up to fight at 135 and then start fighting at 135, because that’s what he wants? Mikey could have fought him at 135, but he moved up to 140 to fight one of the best 140 pounders out there,” added Robert Garcia.

Mikey can’t put his career on hold waiting for Lomachenko to one day move up to lightweight to fight him. I don’t think it’s going to happen. If it does happen, I see it as a situation where Lomachenko is old, and starting to take losses. Once Lomachenko is over-the-hill, and then is see him looking for a fight with Mikey Garcia. Until then, I don’t see that fight happening.

Mikey should move up to welterweight to go for the big names like Danny Garcia or Keith Thurman. I don’t think it’s a good idea for Mikey to try and fight the winner of the Terence Crawford vs. Julius Indongo fight. Crawford is with Top Rank. If there’s no interest in putting Crawford with Mikey on Top Rank’s part, then it’s a waste of time for Mikey. It’s not a great fight anyway for Mikey to fight Crawford. He can get more attention from boxing fans from fighting Keith Thurman or Danny Garcia in my view.

I get the feeling that Lomachenko is going to stay at super featherweight for a long time. If Lomachenko does move up to 135, he’ll do it after Mikey Garcia leaves the division and starts campaigning as a welterweight.