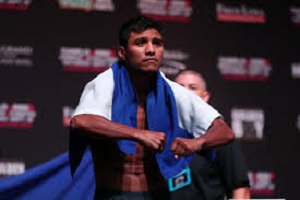 With former pound-for-pound king Roman Gonzalez (48-2, 40 KOs) scheduled to return to action this Saturday night, challenging for Kal Yafai’s WBA super flyweight title, Gonzalez is aiming to rebound from a rough few years to once again become a world champion.

Gonzalez seemingly once had it all, the backing of a huge network in HBO, world titles, pound-for-pound recognition, and he saw much of that fall apart a few years ago. In late 2016 Gonzalez’s longtime trainer Arnulfo Obando unexpectedly passed away. Just a few short months later Gonzalez would lose a majority decision in a rough outing against Srisaket Sor Rungvisai, dropping his WBC title. Gonzalez would rematch Sor Rungvisai in an attempt to regain his title, but would only get handled much more thoroughly, getting beaten up and knocked out by Sor Rungvisai in four rounds.

The Nicaraguan fighter would then take a year off to lick his wounds, returning with a stoppage win over Moises Fuentes, only the after suffer a torn meniscus in training which sat him out for over another full year. Gonzalez eventually returned with a stoppage win over Diomel Diocos this past September, but that was basically just a tune-up for this world title opportunity this weekend.

But speaking on how bad things got for Gonzalez following the consecutive losses to Sor Rungvisai, Gonzalez’s close friend and advisor Carlos Blandon shared these thoughts with ESPN:

“The knockout to Rungvisai was rock bottom,” Blandon said. “Roman had lost his trainer and then he lost the title to Rungvisai in the first fight and then the knockout loss in the second fight. Everything was disintegrating. We had to start all over. Now we have a really solid team and we are a couple of days from being champion again and everybody feels very excited.

“Roman feels energized and ready to take on the world again,” Blandon said. “I haven’t seen that motivation since he lost [Obando] and [since] the knockout. Roman is eager to showcase his talent on Saturday. He is definitely ready for this fight.”

Despite Blandon’s reassurances, there’s still remains lingering questions among fans as to whether or not Gonzalez still has it in him to make his way back to the top and stay there awhile. We’ll get some insight to those questions this Saturday night in Frisco, Texas.